During the meeting, views were exchanged in detail regarding Iran-Saudi Arabia relations, situation in the region, PAK-UAE subject and other matters of mutual interest.

Appreciating the sentiments of the PML leaders, the UAE Ambassador said that the people of UAE attach great importance to relations with Pakistan and duly value their love and sincerity in their hearts. # 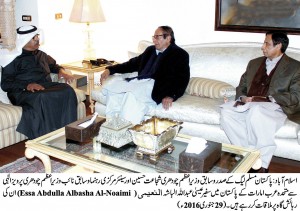