Rulers should pay attention to education and health of people instead of dollars making projects: PML

Addressing the protest rally, Ch Zaheeruddin Khan said that the rulers in Punjab should pay attention to education and health of the people instead of dollars making projects, adequate treatment facilities and medicines are not available to the patients in govt hospitals, funds of education are being spent on show off projects, thousands of govt schools have been closed and children of the poor deprived of educational facilities, after jangla bus historical beauty of the city is being threatened, shops, houses and business of the people are being destroyed and the whole city is facing miserable situation. 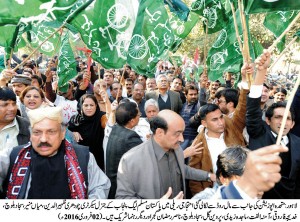