Lahore (July 31, 2016) Senior leaders of Pakistan Muslim League (PML) have said that killers and responsibles of Model Town tragedy will have to account for their doings, spirits of the martyrs are crying for justice for last two years as the killers and the responsibles have not been punished but no headway has been made in this regard, mission of our party whether in govt or opposition is to practically support the poor, oppressed and helpless, this is the reason the measures undertaken by PML govt in Punjab for welfare and well-being of the poor and common man and provision of justice without any discrimination under the leadership of Ch Shujat Hussain and Ch Parvez Elahi are unprecedented.

Talking on this occasion, they further said that after holi of blood Ch Parvez Elahi was first to reach Minhajul Quran Model Town to sympathize and express solidarity and announced to support the oppressed workers of the Tehrik, PML stands with them even today and will continue to stay with them till they get justice, due to tactics being adopted by the rulers for violating the law and then escaping the law heinous crime like murder, dacoity, robbery and kidnappings are increasing with passage of every day because nobody is afraid of punishment.

PML leaders went on to say most regrettable thing is that despite nomination of all accused in the FIR and pinpointing of all those responsible in the judicial inquiry report of a learned judge of the High Court, nothing has been done in this regard. They said no matter whatever the killers and the responsibles do for escaping the law, blood of the martyrs will not go waste in any case, killers and responsibles of this tragedy should not forget that a court will also sit on the Day of Judgment where the martyrs will surely get justice. # 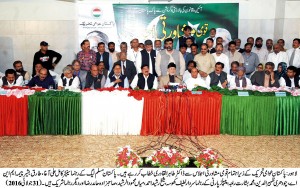