Why pro-India people like Altaf & Achakzai do not get Indian citizenship? Ch Parvez Elahi

Service to the people is our mission, welfare projects live for always, talk with media at chehlum of prominent leader Anwar Ali Cheema in Sargodha

Lahore/Sargodha: 28-08-2016: Pakistan Muslim League (PML) senior central leader and former Deputy Prime Minister Ch Parvez Elahi has said that service to the people is the mission of Pakistan Muslim League, welfare projects live for always, anti- Pakistan elements should not call them as Pakistanis and get Indian citizenship, Pakistan will live forever, enemies will become symbol of lesson for others, our country will become further strong, Nawaz Sharif is announcing new hospitals after these years whereas his younger brother Shehbaz Sharif after admitting failure in running government hospitals and schools in Punjab is giving these on contracts.

He said this while talking to the media along with Moonis Elahi and Dr Khalid Ranjha after attending “Rasm-e-Chehlum” of prominent leader of his party, Ch Anwar Ali Cheema, who had been elected seven times to the assembly, in Sargodha today. On this occasion, son of the deceased MPA Aamir Sultan Cheema and other leaders were also present.

Paying rich tributes to the late Ch Anwar Ali Cheema, Ch Parvez Elahi said that the late PML leader had served the people throughout his life and this big gathering today is the proof that the people always remember their benefactors. He said during tenure of our government did record welfare and construction works in Sargodha and besides other mega projects for betterment of the people, he had also inaugurated Rescue 1122 Service here.

Replying to a question about Altaf Hussain and Mahmud Achakzai, he said that the government is not taking any action against those who gave statements against national security and solidarity, in this way the prime minister is deviating from his oath and as such statement-mongering has become a fashion. He said Altaf Hussain and Mahmud Achakzai have got respect and all this because of Pakistan, if they have so much hostility against Pakistan in their hearts and minds that they emit poison against it every day and display their being pro-India then they have no right to keep Pakistani passport and citizenship, Pakistan has showered so much on them but they are enemy of Pakistan ungrateful.

Commenting on the announcement by the prime minister regarding construction of 33 new hospitals, Ch Parvez Elahi said that during our tenure in Punjab free facilities of health and education were available to the people, besides closing schools of the poor children the claimant of being Khadam-e-A’ala has himself been forced to admit destroying of the government hospitals and advertising for giving on contract hospitals also like schools, poor patients and their relatives run around in hospitals and they get no medicines, no free test and other medical treatment as such, entire provincial budget is being utilized on jangla bus and orange train.# 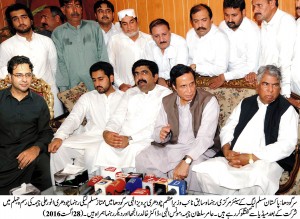