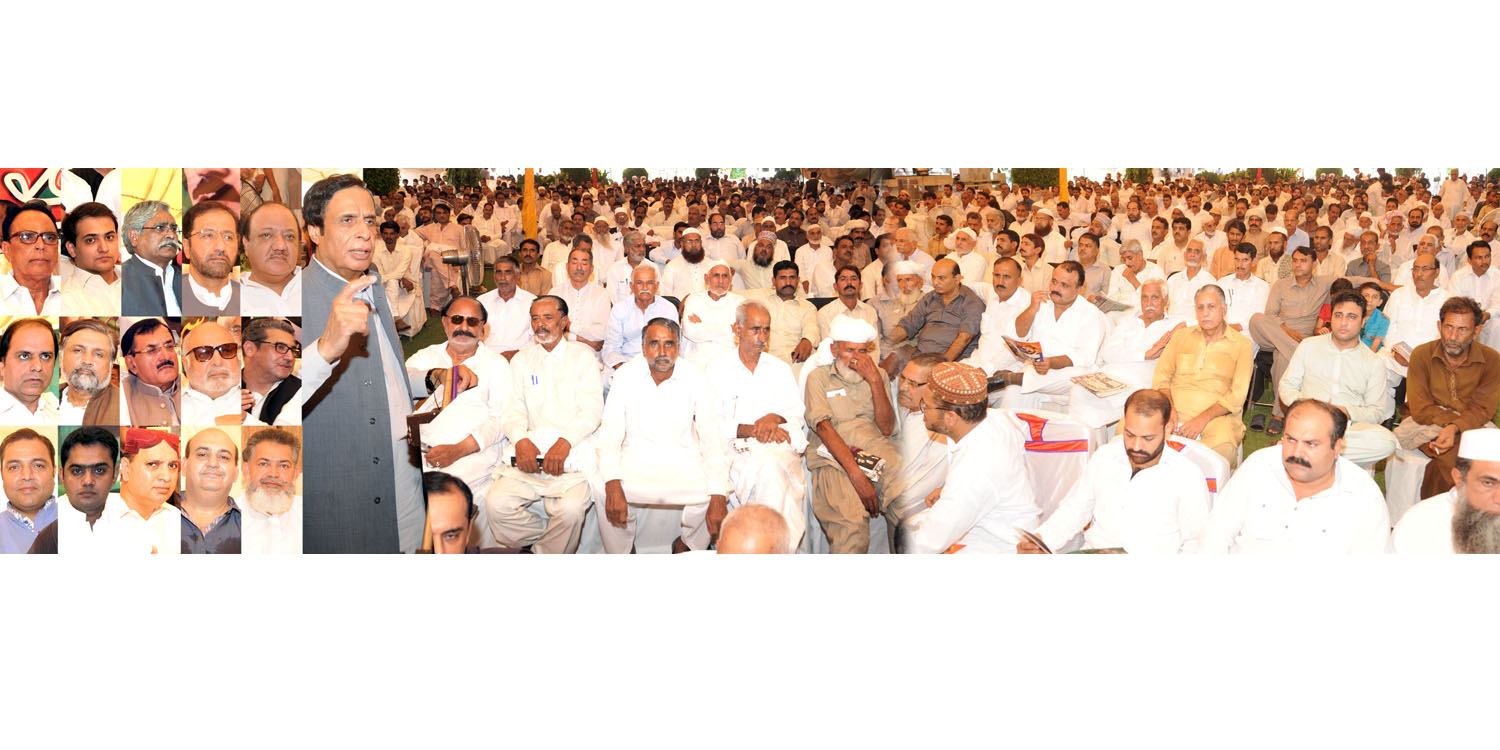 Ch Zahoor Elahi mission of service and protection to the people will be continued always, Ch Shujat Hussain, Parvez Elahi

All sectors including health and education have been destroyed in Punjab, benefitting Indian farmer destroying Pakistani, people remember our era

Lahore: 25-09-2016: Pakistan Muslim League (PML) President and former Prime Minister Ch Shujat Hussain, senior central leader and former Deputy Prime Minister Ch Parvez Elahi, Ch Wajahat Hussain and Ch Shafaat Hussain have pledged on 35th death anniversary of Ch Zahoor Elahi Shaheed that treading of the path told by the Shaheed we will continue his mission of service and protection to the people and upholding cause of Pakistan, we have learnt spirit of serving the people from him, so like him we never say no to anyone.

Addressing a big gathering and talking to the media in Zahoor Elahi House, Ch Parvez Elahi said that Nawaz Sharif has not said anything new on Kashmir issue in General Assembly, every ruler of Pakistan has been presenting the same stance for last 70 years, our hearts beat with the Kashmiris.

He said all our national institutions provided complete and concrete proofs to Nawaz Sharif about Modi’s interference in Balochistan and involvement in terrorism in Pakistan but he made no mention of these in his speech in the General Assembly although Modi himself has admitted terrorism for separation of East Pakistan, but now after undertaking activities of terrorism in Balochistan through RAW and arrest of in service Indian army officer Kulbhushan Yadav under UNO Resolution 1373 Modi government is guilty of war against Pakistan and international terrorism but Nawaz Sharif said in this regard because of his friendship with Modi and he invites him in his house on marriage, this is the reason that Nawaz Sharif is silent despite worst Indian terrorism in Pakistan and giving Indian citizenship as Ibrahim to Brahmandagh Bugti.

He said that the Kashmiris themselves have kept the Kashmir issue alive by offering sacrifice of their lives, if Modi tried to impose war on Pakistan then he come to know, what will to India after fatwa for Jahad is given, they can judge this themselves, Pakistani nation and all parties are united against India.

He said further that in the Punjab, Nawaz, Shehbaz Sharif government has destroyed all sectors including health and education, everyone is out on the roads, by importing tomatoes, potatoes and other Indian vegetables they are benefitting the Indian farmers and destroying Pakistani farmers, they are only concerned about jangla bus and dollar making train, their personal economy and showering favours on India but when their government goes then they themselves will lay buried under weight of these.

Ch Parvez Elahi said if Almighty Allah grants us another opportunity then we will again do such works which have never been done before in the history, the poor and common man will again take pride in calling himself Pakistani, we will work for promotion of religion (deen), N-Leaguers have not yet able to complete even the Ring Road whereas they are ready to give the government hospitals also on contract, , we have taken revenge from anyone earlier nor do so in future.

Ch Zahoor Elahi Shaheed’s death anniversary was observed with due reverence and respect in Gujrat, after recitation from Holy Quran, flower wreath was laid on the grave and “fateha” was offered. In the venue of the death anniversary meeting, photos and banners were displayed about services of Ch Zahoor Elahi Shaheed and of Ch Shujat Hussain, Ch Parvez Elahi, Ch Wajahat Hussain, Ch Shafaat Hussain, Moonis Elahi, Shafay Hussain and Hussain Elahi.

On this occasion, N-League’s Zonal President Ch Ejaz Ahmad Gondal announced to join PML along with his supporters. Fateha khwani and collective “duaa” was led by Peer Rizwan Mansoor Awami. #