Breaking News
Home / News / English News / Modi is enemy of peace Pak Army and people will give a befitting response to the aggressor: Ch Parvez Elahi

Modi is enemy of peace Pak Army and people will give a befitting response to the aggressor: Ch Parvez Elahi

Firing on Control Line and such actions reflect Indian panic on seeing occupied Kashmir getting out of hand: Talk with media

Lahore: 29-09-2016: Pakistan Muslim League (PML) senior central leader and former Deputy Prime Minister Ch Parvez Elahi has said that Narendra Modi is not just enemy of Pakistan and Kashmir but of peace, firing on Control Line and such actions are result of Indian panic and formal planning on seeing occupied Kashmir getting out of its hand.

Talking to media at his residence here today, he said for defence and security of the motherland people of Pakistan are with their armed forces like a solid rock and they are always ready to give a befitting response to every aggressor.

Paying tributes to the army jawans martyred on the Control Line, he said that full retaliation by Pakistani contingents is appreciable, Modi government cannot cow down Pakistan by such actions, dramas and gimmicks, our armed forces are giving appropriate reply to the actions of the Indian government and forces, regrettably Nawaz Sharif and the Foreign Office during General Assembly session by not presenting the proofs provided by the national institutions about terrorism of serving Indian army officer Kulbhushan Yadav in Balochistan and subversive activities of RAW in Karachi before the comity of nations lost the golden opportunity of exposing terrorist Modi government and it is now doing such activities, Prime Minister Nawaz Sharif and the Foreign Office should at least now start showing these proofs to the world. # 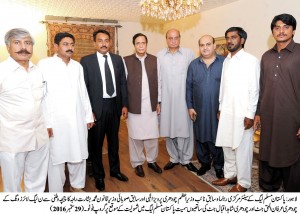