Qatari prince will not come to Pakistan, direction of country not right may Allah put it on right direction, Jahangir Badar was national asset, talk with media

Lahore: 27-11-2016: Pakistan Muslim League (PML) President and former Prime Minister Ch Shujat Hussain has said that the Army Chief has not caste and community, his caste is Pakistan and community Armed Forces of Pakistan, Pakistan is not moving in right direction, may Allah put in on right direction, Jahangir Badar was a seasoned and polished politician and an asset of the nation and the country

He said this while talking to media after offering condolence and fateha for the departed soul at his residence here today. On this occasion he was accompanied by MNA Tariq Bashir Cheema, S.M. Zafar, Salik Hussain and Ali Badar.

Responding to a question about Panama Leaks, he said that all eyes are on the Supreme Court whose verdict will be accepted by all, Qatari prince will not come to Pakistan, if he comes then he will have to stand in witness box. About Bilawal Bhutto Zardari, he said presently he is an alternate of Mohtarma Benazir Bhutto.

When asked the new Army Chief belongs to his “Jaat bardari”, he said that for the army chief such things do not matter, everything is Pakistan and armed forces of Pakistan.

Paying tributes to Jahangir Badar, he said ” despite belong to another party, he had great respect for me and always kept me in front in the meetings, he was my companion in tour of Afghanistan, we had friendly relations”, he was great knowledge and study of Sufi poets, he will recite verses of Bulleh Shah and then explain their meanings, he was very close and trusted colleague and also was symbol of Peoples Party in Punjab as well. 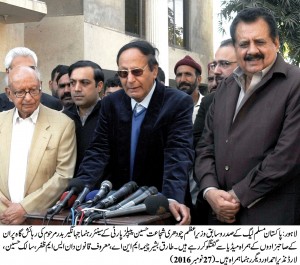