Lawyers leaders expressed gratitude to Ch Parvez Elahi for the works he had done as the Chief Minister for lawyers fraternity were unparalleled, set up prosecution department for provision of quick and cheap justice, made housing schemes for the lawyers, provided facility of free treatment in the hospitals.

Ch Parvez Elahi said that during last nine years present rulers have done no mentionable work for the lawyers community, if we get the opportunity again then we will do more ideal works for the lawyers. 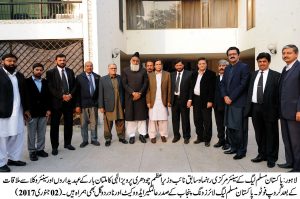