He said this while talking to media along with leaders of four parties after holding a meeting at his residence in Islamabad today (Friday). The meeting evolved unanimous strategy for participation in the All Parties Conference (APC) convened by the Pakistan Peoples’ Party.

The meeting deliberated in the context of unanimous strategy over matters relating to national and political situation, National Action Plan and extension of the military courts and FATA.

Ch Shujat Hussain said that people were saying do not go to APC of Pakistan Peoples’ Party but our stance is that whenever anyone invites for matters of national nature then one should must go in the national interest and we always go.

He said that if got an opportunity we want to amend National Action Plan whereas we also want to bring about constitutional amendments regarding powers of military courts so that military courts work freely and without any criticism. He said that reforms in FATA be implemented forthwith ahead of 2018 as five years wait cannot be done.

Senator Kamil Ali Agha said that all ally parties have gathered here at the request of Ch Shujat Hussain and purpose of today’s meeting was to evolve joint strategy for tomorrow’s APC.

Khurram Nawaz Gandapur said that unanimous strategy has been evolved, we want to move together in the interest of the nation and the people. He said that we are not against CPEC, it should be implemented in the manner on which all provinces are unanimous.

Sahibzada Hamid Raza said that interest of the country and nation is precedent over anything else, we should be unanimous and united in national matters.

Allama Nasir Abbas said that action should be taken against those carrying and display arms in the country according to the provisions of the National Action Plan. # 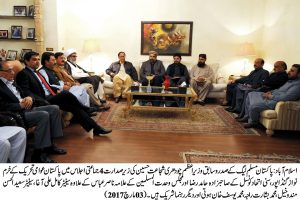