Breaking News
Home / News / English News / Whatever verdict in Panama case may be rulers have fallen in the eyes of people: Ch Parvez Elahi

Whatever verdict in Panama case may be rulers have fallen in the eyes of people: Ch Parvez Elahi

Ch Zaheeruddin is playing important role in organizing and activating the party in Faisalabad, talk with delegation

Ch Parvez Elahi said that situation in the country presently is very tense, law and order situation is worsening every day, rulers are not worried about people but themselves only. He said that whatever verdict may come in Panama case, rulers have lost their respect in the eyes of the people that is why the rulers today are hiding their faces from the people, if they come across in a gathering then sometime they ask media to go out or just slip away.

He said that Ch Zaheeruddin is playing important role in organizing and activating the party in Faisalabad.

On this occasion recalling tenure of Ch Parvez Elahi in golden words, Mian Abu Bakr Hamza said that facilities provided to the farmers and businessmen community during that tenure are unparalleled “one gets respect in politics only in your party, this is why even the opponents call names of Chaudhry Sahibaan respectfully”. # 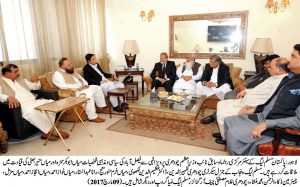