We did works more than for 55 years in 5 years: Ch Parvez Elahi challenged Shehbaz Sharif

Gave preference to Multan and South Punjab, will do that again in future, established Multan Cardiology Hospital and Dental College, Children Hospital and Women Crisis Centre are also our projects

Jangla bus benefitted Shehbaz Sharif and not people, should have constructed hospitals, schools and colleges for benefit of the people like us, talk in Multan, will address workers convention today

Lahore/Multan: 25-03-2017: Pakistan Muslim League (PML) senior central leader and former Deputy Prime Minister Ch Parvez Elahi has thrown a challenge to Shehbaz Sharif that he has not done anything for the people while we during our five years tenure did works for more than 55 years in Punjab including Multan and southern regions, poor and common man and backward areas particularly Multan and South Punjab remained our preference and will remain same in future as well.

He said we had completed many projects of public welfare including Cardiology Hospital and Dental College in Multan whereas Rs 28 billion jangla bus in Multan has not benefitted the people but Shehbaz Sharif did gain financial benefit, instead he should have constructed hospitals, schools and colleges like us then all people would have been benefitted.

He said while talking to the media at residence of Mureed Abbas Bappi in Abbaspur after reaching Multan on two days party reorganization tour today (Saturday). He will be addressing the Workers Convention here on Sunday.

He said holding of workers convention in every district is an important step in the reorganization of the party. He said that our development works are unparalleled in the history of Pakistan and Punjab, we have great love and affection for Multan, we undertook works in South Punjab for the first time, Multan Children Hospital project was also made by us 9 years ago, with which face Shehbaz Sharif is performing its inauguration today, Dental College was also established during our tenure, Khadam-e-A’ala inaugurated Women Crisis Centre in Multan today whereas this project was also started during our tenure, he has increased the problems of people of Multan with Rs 28 billion jangla bus. Ch Parvez Elahi said that focus of our politics was welfare of common and poor man whereas his focus is on money making, he has done nothing for the benefit of the people, we had provided maximum employment opportunities to the people.

Replying to a question, he said whatever verdict comes in Panama case but once among the people has been “chor, chor” (thief, thief), now public eyes are on the great judgment of the superior judiciary, we pray for such a verdict which should enhance the prestige and respect of the judiciary and people should accept it.

He said, ministers of Shehbaz Sharif for confirming their jobs in the next election are running around here and there, they themselves are aggrieved, even orphans are better than them for whom someone is there to look after.

Ch Parvez Elahi further said that efficiency of the rulers has been fully exposed and known and people have learnt how to differentiate between good and bad, they know as to who is their well-wisher and who is the enemy.

He said that as elections are approaching, like-minded parties are getting ready to form an alliance together, our party will fully participate in the elections, we will contest the election on the basis of our performance during last five years. 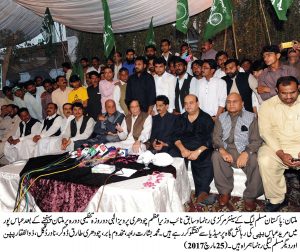