Breaking News
Home / News / English News / Panama case: if I was prime minister then would have quit politics on against verdict: Ch Shujat Hussain

Panama case: if I was prime minister then would have quit politics on against verdict: Ch Shujat Hussain

Informal talk with Ajmal Wazir and other party leaders

Islamabad/Lahore: 01-04-2017: Pakistan Muslim League (PML) President and former Prime Minister Ch Shujat Hussain has said that if he was the prime minister then would have quit politics on against verdict in Panama case.

Hs said while informally talking with a delegation which came to meet him under leadership of party’s Central Senior Vice-President and Chief Organizer Khyber Pukhtoonkhwah (KPK) and FATA Ajmal Khan Wazir at his residence on Saturday. On this occasion, Ch Shujat Hussain talked about organizational matters of KPK and FATA, political situation and other matters.

He appreciated successful holding of party convention in Haripur, Hazara and said that the decision of organizing party convention at divisional level in the province will; make the party more active and strong.

Appreciating the efforts of Ajmal Khan Wazir for reorganizing and activating the party in KPK and FATA, he said that the party has been elicited in very little period.

Ch Shujat Hussain further said on this occasion that all are waiting for the verdict in Panama case and if the verdict comes against the prime minister and I was PM then would have accepted the verdict, resigned and announced retirement from politics”. # 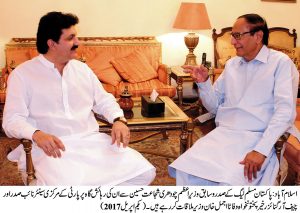