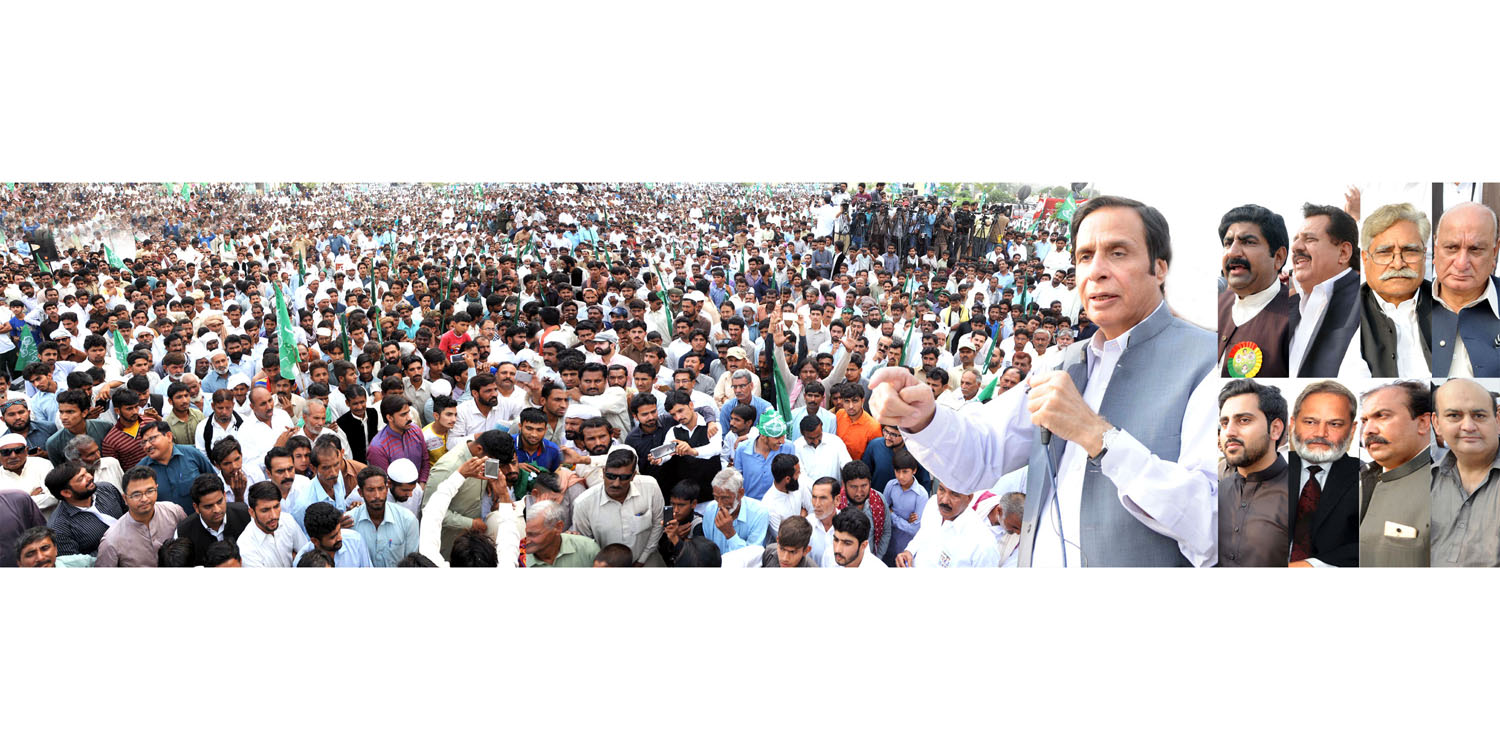 They are not making electricity but money, we will construct Kalabagh dam and provide power at Rs three per unit and run agriculture tube-wells free: Ch Parvez Elahi

Sindh will get sweet water more than anyone else, Punjab will get water after KPK and Balochistan, get water war end

Nawaz Sharif goes abroad for treatment after contesting election twice from Sargodha, we will make such cardiology hospital that he also gets treated here

Works which Anwar Ali Cheema, all assembly members from Sargodha cannot do that in 20 years, such a great gather proof of peoples love for Aamir Sultan and Muneeb Sultan, address at grand workers convention

Lahore/Sargodha: 05-04-2017: Pakistan Muslim League(PML) senior central leader and former Deputy Prime Minister Ch Parvez Elahi has said that the present rulers are not making electricity but money, they have also committed economic murder of the farmer by not constructing Kalabagh dam, with your support we will construct Kalabagh dam and instead Rs 16 will give electricity at Rs 3 per unit and will operate agriculture tube-wells free, after construction of this dam Sindh will get maximum of sweet water whereas Punjab will get water after Khyber Pukhtoonkhwah and Balochistan provinces and we will also end war among the provinces.

Addressing a grand and enthusiastic Workers Convention in Sargodha Wednesday, he said Nawaz Sharif goes abroad for treatment after winning election twice from Sargodha and in the District Headquarters Hospital 100 new born children have died due to non-availability of incubator whereas we had got constructed here agriculture university and medical college, now we will construct such cardiology hospital that Nawaz Sharif also gets treated here.

Talking about his 36 years long association with late Anwar Ali Cheema, Ch Parvez Elahi paid very rich tributes to him and said that the works which Anwar Ali Cheema had done, all members of assembly from Sargodha cannot do that in 20 years even, such a big gathering here today is ample proof of his unforgettable services and peoples love for Aamir Sultan and Muneeb Sultan.

He said previously we had provided education and medicines free and abolished tax on five marlas now we will give free education up to BA. He expressed his heartfelt grief and sorrow over loss of 22 precious lives in Sargodha tragedy and six in Lahore.

Ch Parvez Elahi emphatically stated that we do not do politics but serve the people, you make Muslim League victorious once again the country will become prosperous, despite all tall claims of the present rulers the country is still facing worst ever electricity load shedding, government hospitals and educational institutions are in very bad conditions, the prime minister is issuing heath card but where the poor patients should go with the health card ?, they have not been able to even get roads constructed during our tenure repaired even in nine years, feet of the rulers have lost their balance and wavering, Dolphin Force of Shehbaz Sharif itself is looting the people, all our projects of public welfare and service including 1122 are still running even today, all their schemes and projects have died their death, there is lesser demand for electricity in winter they claim load shedding has been reduced, when there is no electricity in summer they put whole blame on weather and say will reduce load shedding next year, like this both the brothers are making electricity by merely talking for last nine years but electricity do not come just by talking, the rulers are engaged in making money and not electricity, so far 9. 5 billion dollars have far been sunk in 8 flop electricity projects; there are misappropriations worth billions in every project.

He asked the people to vote for Pakistan Muslim League and should also guard their vote themselves in order to get rid of oppressive rulers.

Secretary General Tariq Bashir Cheema said that the ruling party had got our banners and posters removed overnight, such doings will not help, love for Anwar Ali Cheema and Ch Parvez Elahi in the hearts of the people will not be reduced in any manner, the government is afraid that time is running out of their hands.

Workers Convention was participated by thousands of workers including youth, farmers, women and ulema wings workers. All of them had come in processions chanting slogans enthusiastically throughout the convention proceedings of “Long Live” Ch Shujat Hussain, Ch Parvez Elahi late Ch Anwar Ali Cheema, Ch Aamir Sultan Cheema and Moonis Elahi. Posters carrying photographs of PML leaders were hung in all crossings and main roads of Sargodha City. When Ch Parvez Elahi came on the stage for speech, the participants stood up in front of their seats and kept chanting loud slogans for quite some time. #