No judge declared him as “Sadiq & Ameen”, CJP should ensure transparency of JIT, fortnightly performance be made public

Lahore: 23-04-2017: Pakistan Muslim League (PML) President and former Prime Minister Ch Shujat Hussain, Amir Jamaat-e-Islami Senator Sirajul Haq and Ch Parvez Elahi have said that out of five members bench of the Supreme Court none had declared the Prime Minister Nawaz Sharif as “Sadiq & Ameen”, he should resign prior to appearance before JIT, Chief Justice of Pakistan should ensure transparency of JIT and its performance should be made public after every fortnight.

The PML leaders said this along with Amir Jamaat-e-Islami while talking to the media after meeting with high level delegation of the Jamaat at their residence here today (Sunday). Amir Jamaat-e-Islami Amir on arrival with Dr Fareed Piracha, Mian Maqsood Ahmad, Dr Waseem Akhtar, Asghar Gujjar and Qaiser Sharif was warmly welcomed.

During the meeting, it was decided to form a committee comprising two senior lawyers of each party which will monitoring working of JIT on daily basis, a delegation headed by Ch Shujat Hussain will Mansoora on Monday to formally invite Jamaat-e-Islami to join the grand opposition alliance on Panama issue.

Expressing gratitude to Sirajul and other leaders, Ch Shujat Hussain said that all opposition parties should forget about their differences, Nawaz Sharif should have resigned earlier on, , all judges have in fact given one decision, our meeting with Amir Jamaat-e-Islami was very useful.

Ch Parvez Elahi said there is nobody has difference over agenda of the alliance, all parties are unanimous against corruption and are in favour of forming the alliance.

In reply to a question, he said that the rulers always keep dhol and sweets with them, dhol was beaten and sweets distributed even before hearing full judgment, after reading the verdict dhol, sweets and address to the nation all disappeared.

Amir Jamaat-e-Islami Sirajul Haq while appreciating the role of Ch Parvez Elahi, Tariq Bashir Cheema and Kamil Ali Agha on formulating joint TORs of the opposition over Panama case said that on his arrival here he is thankful to the senior most politician of Pakistan Ch Shujat Hussain. He said corruption is mother of all problems, joint team of lawyers of Jamaat-e-Islami and Muslim League will be announced shortly, JIT is constituted always constituted against terrorists, this is the first time that the terming the prime minister as an accused the Supreme Court has directed him to appear before JIT. # 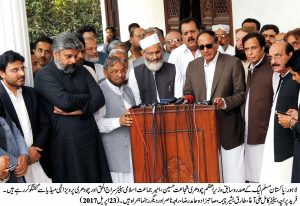