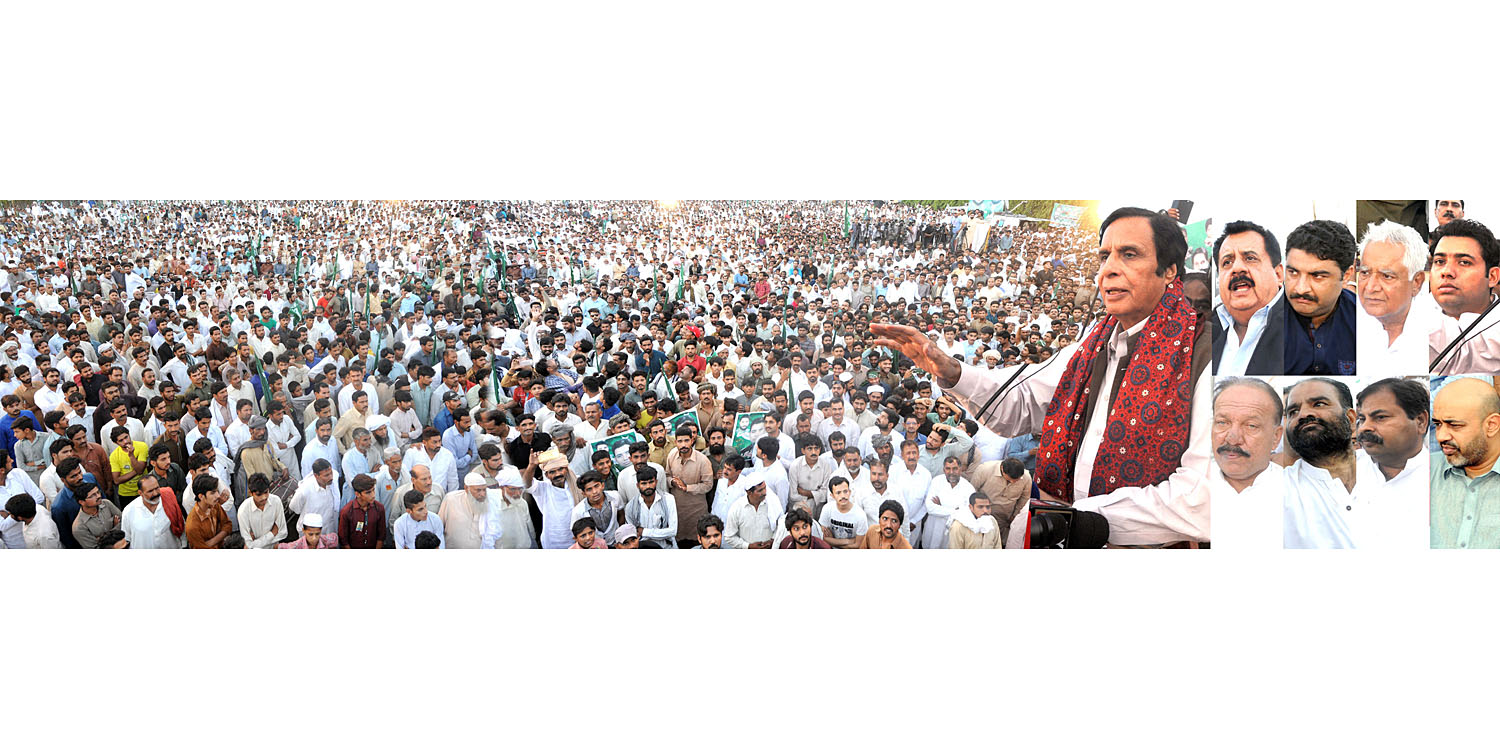 In Kulbhushan case, we kept searching for a lawyer, Modi even engaged our prime minister: Ch Parvez Elahi

In Panama case eyes of the entire nation are on Supreme Court and JIT, may Allah grant them success, all are fed up with the rulers

Successful convention than earlier in every city is ample proof that due to our previous services people have hopes from us, address in Sheikhupura

Lahore/Sheikhupura: 21-05-2017: Pakistan Muslim League (PML) senior central leader and former Deputy Prime Minister Ch Parvez Elahi has said that in the case of Indian navy officer Kulbhushan caught red handed doing terrorism and sabotage in Balochistan we kept searching for a lawyer for the International Court of Justice but Modi engaged our prime minister even, in Panama case eyes of entire nation are on Supreme Court and JIT, we pray almighty may bless them with success, in every city our convention is getting more successful than earlier one which is proof of that due to our previous services people have hopes from us.

He said this while addressing a grand Workers Convention in Sheikhupura today (Sunday) which was attended by thousands of enthusiastic workers.

Ch Parvez Elahi said that Nawaz Sharif considers Kulbhushan case only of the army, he was caught by the army while committing terrorism and sabotage in Balochistan and India calls him as its son but Nawaz Sharif has not said even a single against him till today, Nawaz Sharif was given in writing but he did mention him even in his speech in the United Nation, in fact the government had intentionally mishandled Kulbhushan case and for strengthening the Indian stance reached the International Court of Justice without making any preparation, people in their cases sometime engage government lawyer as well with their own lawyer but if Modi had engaged even our prime minister then what should the army do and the nation should do when our prime minister should all limits in friendship with the killer of Muslims in Gujarat and Kashmir, who got Pathankot incident FIR registered in Gujranwala and afterwards Indian agencies said Pakistan is not involved.

He said that in the Panama case, JIT is test of all national institutions and established people have been included in it, its fortnightly report should be made public so that the nation knows as to what headway is being made in the case, entire family of the prime minister has been trapped into it, now they will not get way for running away, Pakistan’s future is linked with JIT report and because of this the rulers will meet their fate.

Continuing, Ch Parvez Elahi said that farmers, workers, employees, businessmen, industrialists all are fed up with the rulers and praying for getting rid of them and remembering our tenure. He said during his government half bill of agricultural tube-wells was paid by Punjab government, we ensured water reaches tail, got concrete courses constructed, provided employment to the people, gave them prosperity, Pakistan Muslim League on coming into power will restore that golden era again.

Ch Parvez Elahi said that if someone does not like the name of Kalabagh dam then it can also be given the name of Pakistan dam, this will not only provide adequate water but also electricity will be cheaper, their power projects are failing one after the other because these are dramas of taking commission, they should establish even one institution like ours 1122, all their projects and schemes are flop, we exempted twelve and half acres from tax, they imposed it again, then they say make CPEC successful “but I say they will be packed in it”. He said these rulers tell lies repeatedly, there are in power for nine years but they have done nothing for welfare and service of the people, World Bank report says Shehbaz Sharif is spending 62 per cent of Punjab budget on Lahore but it is being wasted in Lahore also on orange train.

Party Secretary General and MNA Tariq Bashir Cheema in his address said that Law Minister Rana Sanaullah says that JIT has been formed to bury the Panama case “but I say now nobody will go to Jeddah, now they will have to account for their deeds”. He said leader is only one whose house, business and children are in Pakistan, vote only for him so that he works for his country, era of prosperity which was in Punjab can only be brought back by Ch Parvez Elahi, thieves government will not last long, their departure time is very near, we are ashamed that we could not take care of development works which were undertaken by Ch Parvez Elahi in Punjab, these rulers have destroyed Punjab in the lust for commission.