Every new born in province till 2046 will be under debt, entire nation praying for getting rid of rulers and victory of cricket team

Punjab budget showoff, bag-full of rigging, half of funds allocated for education, health and agriculture like last year will be utilized on orange line

Despite having two governments electricity shortfall even today is 5000 megawatt, secrets of Sahiwal coal power project being hidden: press conference

Lahore: 04-06-2017: Pakistan Muslim League (PML) senior central leader and former Deputy Prime Minister Ch Parvez Elahi has said that begging bowls for not taking loans Nawaz Sharif and Shehbaz Sharif each is carrying a deg on his shoulder and sunk Pakistan and Punjab in loans, Punjab loan will be payable in 2046 and till every new born child in the province will under debt, entire nation is praying for getting rid of the rulers and for victory of cricket team.

Addressing a press conference along with MPAs Vickas Mokal, Shah Muhammad Khagga, Khadeeja Farooqui and Mian Munir at his residence here today (Sunday), he said that new Punjab budget is also bag full of showoffs and rigging, more than half of development funds allocated for education, health and agriculture and other projects like last year will be utilized on the orange line, having both the governments electricity shortfall even today is 5000 megawatt whereas secrets of Sahiwal coal power project are being hidden.

Ch Parvez Elahi said that both the brothers have become “hero” of taking maximum loans in the history of Pakistan and Punjab, during our government in Punjab loans were Rs 267 billion which have now increased to Rs 721 billion, their budget is saying that loans will reach the level of Rs 568. 12 billion by June 30, 2017 and if Rs 128 billion loan of orange line and Rs 25 billion included then the total becomes Rs 720 billion including 95 per cent i. e. foreign debt of Rs 681 billion and remaining 6 per cent is local debt, according to the White Paper even after paying loans and interest regularly this cannot be ridden off by 2046.

He said that claimants of historical development budgets had allocated Rs 550 billion in the last budget out of which only Rs 264 billion i. e. 48 per cent have been utilized so far and the rest cannot be spend in remaining two months. He challenged Shehbaz Sharif that more than half of the funds have been allocated for showoffs of which there is documentary proof. He said in the Sahiwal coal power project government and company’s ownership and other details are being hidden because there is no transparency in it.

He said further during Peoples Party tenure Shehbaz Sharif used to sit with hand fun at Minar-e-Pakistan that shortfall is 5000 megawatt, according to their federal minister the same shortfall is there even today so after 9 years of their coming and going and inaugurating the same project thrice in a year and spending crores of rupees, where electricity of these projects has gone?, because Quaid-i-Azam solar, Nandipur ND Bhikki power projects all are dollars making projects.

Ch Parvez Elahi said that out of Rs 10 billion in energy sector only Rs 3. 8 billion, educational development funds only Rs 33 billion out of Rs 63 billion, only Rs 22 billion out of Rs 47 billion on secondary schools, child care centres of primary schools children only Rs 36 crore have been spent against Rs 1. 88 billion and rest have been cut and diverted to the orange line, proof of which is the loan of Rs 10 billion given to LDA for orange line that is not included in the budget books.

He said in the health sector Rs 29. 62 billion have been utilized during last ten months but where this money has gone nobody knows because there are neither beds, nor ventilators or medicines in the hospitals, there is actually emergency in emergency wards because there are four, four patients lying on one bed, Mayo Hospital Surgical Tower and Wazirabad Cardiology Hospital funds have also been diverted to the orange line and this time the plan is that other sectors funds will be dumped in orange line.

He said that the government claims even regarding Punjab Safe Cities Project have been proved false, Lahore project was to be completed by June 2017 at a cost of Rs 13 billion and Faisalabad, Rawalpindi, Gujranwala, Multan and Bahawalpur project were to be completed by December 2017, for untrained Dolphin Force only motor cycles were procured for Rs 41 crore but in Lahore city dacoities have increased more than earlier on because you can escape the dacoits but not from them whereas Shehbaz Sharif terms snatching of mobile phone at gun point as theft instead of dacoity, he has done a hand with police also and out if Rs 11. 24 billion for development works of the police only Rs 5. 14 crore have been spent. 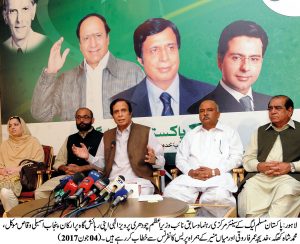