He said that threats to the JIT amount to direct threat to the Supreme Court.

In reply to a question, he said that in the Panama case two judges have not given dissenting note but verdict against Nawaz Sharif.

Ch Shujat Hussain said that with the headway in the proceedings of the JIT, opposition’s strategy will also come to the fore.

Replying to a question about opposition parties’ alliance, Ch Shujat Hussain said that two or three candidates for prime minister-ship are the obstruction in the way of alliance. He said only Almighty Allah knows better as who will be the prime minister in 2018.

He also condemned torture and violence on the journalists in Faisalabad. 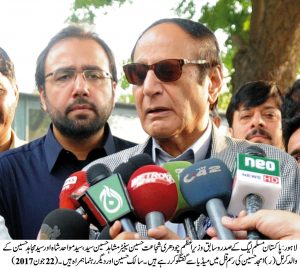