If N-League did not accept court verdict then people will be on roads: Ch Shujat Hussain, Parvez Elahi

Shehbaz Sharif should not punish the poor, should put his “Don Hat” photos on our projects and complete them, talk with media

Lahore/Gujrat: 28-06-2017: Pakistan Muslim League (PML) President and former Prime Minister Ch Shujat Hussain and senior central leader and former Deputy Prime Minister Ch Parvez Elahi have said that if N-League did not accept the court verdict then the entire nation will be on the roads, Shehbaz Sharif should not punish the poor any more, he should put his “Don Hat” photos on our public welfare and well-being projects and complete them, these rulers are real responsible for Ahemedpur Sharqia tragedy, if burn centres established our tenure were functional then no need would have arisen to shift the patients to Lahore through C-130 and many lives would have been saved.

They expressed these views while talking to the media in Gujrat on Eid day.

Both the leaders offered Eid prayers along with Ch Wajahat Hussain, Ch Shafaat Hussain, Moonis Elahi, Rasikh Elahi, Shafay Hussain, Muhammad Elahi, Hussain Elahi, other family members, large number of party leaders and workers and people from all walks of life in Gujrat and offered “fateha” for the departed souls of elders in their ancestral graveyard. Afterwards they exchanged Eid greetings with people from all walks of life and others on the occasion.

Ch Shujat Hussain said that the nation cannot forget the officers and jawans martyred in the defence of the country and protection of the people and being target of terrorism and their remembrance is still greater on Eid.

Ch Parvez Elahi said that the entire nation has prayed during holy month of fasting Ramadan-ul-Mubarak for rulers going to their homes, if the court declares the rulers incompetent then they should go to their homes silently. He said that N-League ministers kept talking in Nawaz Sharif language and when this did not satisfied then Nawaz Sharif himself started talking, this is a matter of regret and sorrow that Prime Minister Nawaz Sharif is using words like joke and puppet shows about the Supreme Court, N-League in fact wants verdict of its choice.

He said projects of Surgical Tower and Burn Unit in the Mayo Hospital of his tenure have not yet been completed. # 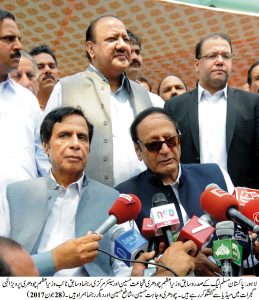