Ch Parvez Elahi expressed the belief that Shehbaz Sharif and other accused involved in the murder of 14 innocents in Model Town tragedy will not be saved from punishments before Almighty Allah and in the worldly court, our courts have written history, Justice Baqar Najafi report will be published and Shehbaz Sharif and all other accused will essentially be punished.

He said we have supported PTI in the bye-elections and we are trying that entire opposition should jointly support their candidate.

He also asked the media that on the election day particularly media will have a major role because N-League is master of rigging, they have not won any election without rigging till now, Shehbaz Sharif himself had constituted Baqir Najafi Commission and now keeping its report under the carpet because he is seeing the hanging rope and after killing 14 innocents he is now afraid.

Expressing heartfelt gratitude to Ch Shujat Hussain, Ch Parvez Elahi and Pakistan Muslim League for supporting PTI candidate, Ch Sarwar said that Muslim League had also guided and supported us NA-122 constituency, Kamil Ali Agha has great influence in NA-120 and we are thankful to Ch Parvez Elahi that he has asked Kamil Ali Agha to perform election activities for us and sensible Muslim League women polling agents will also be representing us. He demanded that Baqir Najafi report be published forthwith.

Ch Sarwar said further that N-League is setting new records of pre-poll rigging, Election Commission is not paying attention to our complaints such as 30 thousand votes are not verifiable, 6 polling stations have been set up in one building, we have decided to approach High Court in this regard, he added. # 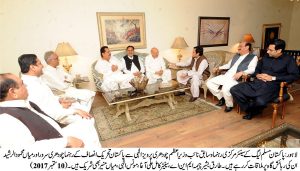