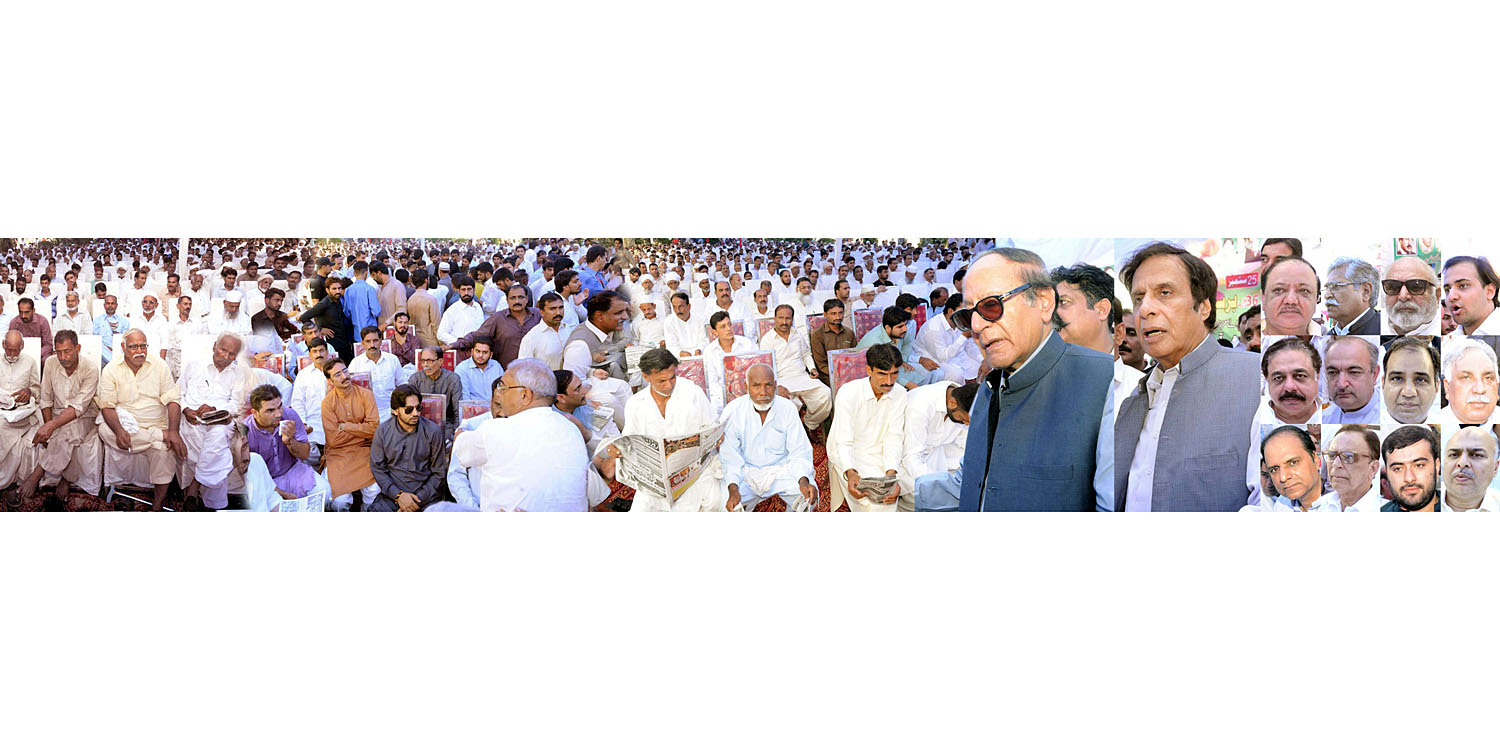 If Model Town massacre culprits Shehbaz Sharif and Sanaullah are punished then nobody will dare shed blood of any innocent civilian in future, Ch Parvez Elahi address at death anniversary of Ch Zahur Elahi Shaheed

Lahore: 25-09-2017: Pakistan Muslim League (PML) President and former Prime Minister Ch Shujat Hussain has said that heinous conspiracy of Nawaz Sharif to undermine army and judiciary will Insha-Allah fail whereas addressing gathering of thousands of people coming from every district and area on the occasion of death anniversary of Ch Zahur Elahi Shaheed in Gujrat today (Monday) Ch Parvez Elahi said that Shehbaz Sharif and Rana Sanaullah are accused of massacre in Model Town Lahore if they are punished then in future nobody will dare to shed blood of innocent civilian in future.

In his address Ch Shujat Hussain further said that he has not seen such bad time in Pakistan till now, for personal ego Nawaz Sharif tried to do every such work which was in his favor and against the country. He said everywhere slogans of Go Nawaz Go Nawaz are being chanted, slogans of “Chore, Chore” have also been raised in Masjid-e-Nabavi what more insult than this can be, if he is not bothered about himself then he should at least think about his late father, Nawaz Sharif has not even spared his daughter got her signatures on fake documents and then says “mujhey kiyon nikala” (why shunted me out).

Ch Shujat Hussain said that Supreme Court and the army are two such institutions on which no pride is enough but Nawaz Sharif tried his level best to defame both these institutions, Supreme Court deserves due appreciation for withstanding everything with courage “I am predicting today that new days are coming and circumstances will change soon”.

Heartily thanking participants of the death anniversary, Ch Parvez Elahi said on the martyrdom of Ch Zahur Elahi all opponents had gathered together and tried every possible effort to end politics of our family but failed in achieving their objective, proof of which is presence of all of you today here N-League is in power for last 25 years but still it is a laughing stock everywhere hold match themselves but in it and everywhere else where they go slogans of “chor chor” are raised, what is the use of such wealth and rule in which there is no respect, Chottu gang Shehbaz Sharif thinks that he will not be punished for shedding blood of 14 martyrs of Model Town, “I have faith in Almighty Allah and say that Shehbaz Sharif and his colleagues Rana Sanaullah and former IGP will surely get such punishment which history will remember, look at the nature that now the entire family has become thief, speeches of Nawaz Sharif himself are becoming evidence against him, this family has not done any work for the poor and common man, they have snatched loaf of bread from the farmers and the poor and now are snatching education also by closing down twenty thousand government schools now.

Ch Parvez Elahi further said that Nawaz Sharif is repeatedly saying why he has been shunted out, he has not understood till today that he has been ousted due to corruption, sucking blood of the poor people and oppression, the people have even thrown Sharif family out of their hearts, Sharif family and their colleagues have looted and plundered the country and piled up their wealth, condition of Gujrat city is worst than before, billions of rupees were “spent” here so that boats are ruin in rain, national economy has been destroyed, N-League has been in power for 25 years but till now not a single megawatt of electricity has been produced till now, there is shortfall of 4000 megawatt in the country today even, Nawaz Sharif has taken all his wealth abroad and their own assembly members are crying as to what has happened to them.

He said his heart believes that when we will gather again next year to observe death anniversary of Ch Zahur Elahi Shaheed then circumstances of Pakistan would have changed because destruction (dharan takhta) takes place suddenly, people will get rid of these oppressive rulers forever as such “I appeal to you while casting vote particularly differentiate between who is your friend and who is not”.