Rana Sanaullah old spokesman of Qadianis, why rulers not pulling him down from their lap: Ch Parvez Elahi

Lahore: 14-10-2017: Rana Sanaullah is an old spokesman of the Qadianis, why Nawaz Sharif and Shabhaz Sharif are not pulling him down from their lap.

Ch Parvez Elahi said that all of our life and property is for sacrifice on Namoos-e-Risalat (ﷺ), every Muslim has full faith in Khatam-e-Nubawwat (ﷺ) and he can sacrifice his everything on this, Rana Sanaullah has earlier also given statement in support of the Qadianis a number of times, the rulers should not forget that every child of this country is torch bearer of safeguarding Namoos-e-Risalat (ﷺ).

Endorsing Ch Parvez Elahi, Sahibzada Sultan Sarmad Qadri said that Rana Sanaullah should refrain from committing blasphemy, every Pakistani is ready even to sacrifice his life for Namoos-e-Risalat (ﷺ).

Ch Parvez Elahi further said that recent step of changing oath of Khatm-e-Nubawwat that commitment of Nawaz Sharif is also becoming visible which he had done in 2013 in London, Britain, and he is keeping people like Rana Sanaullah close to him.

Ch Parvez Elahi said irrespective of whether PML is in power or not it attaches great importance to the welfare and well-being of working class, raises voice for them at every forum, this is the reason that we have representation in every labour organization in Pakistan and our workers colleague are taking the message of the party at every level. He said for prosperity of Pakistan, prosperity of the workers is essential.

Appreciating the leadership qualities of Ch Shujat Hussain and Ch Parvez Elahi, Haji Muhammad Saeed Arain said that there is parallel of your five years tenure of government, as the Chief Minister what ideal works you did not welfare and well-being of workers, the working class still remembers those good ideal works even today.

He said that for activating Pakistan Muslim League throughout Pakistan, representative meeting of labour bodies will be convened shortly. # 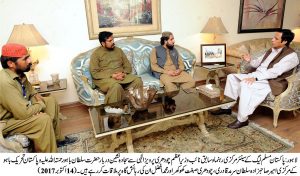