After Khatm-e-Nubawwat, dangerous game of further hurting sentiments of Muslims in the garb of human rights under peculiar foreign and un-Islamic agenda should not be played, talk with Jamaat-e-Islami delegation

He said this while talking to a delegation of Jamaat-e-Islami comprising Central Secretary General Liaquat Baloch, Naib Amir Dr Farid Piracha and Amir Jamaat-e-Islami Punjab Mian Maqsood Ahmed which called on him at his residence here today (Tuesday).

Ch Shujat Hussain said first the government under cover of the election laws interfered with the Khatm-e-Nubawwat matter and now under a peculiar foreign and un-Islamic agenda in the garb of human rights attempts are being made to play dangerous game of further hurting sentiments of the Muslims and efforts are being made to get Namoos-e-Risalat laws changed through the Senate.

He said that Khatm-e-Nubawwat and Namoos-e-Risalat (ﷺ) is basic faith of every Muslim without which no person can be a Muslim at all, the government should refrain from this dangerous game because the government is working on a peculiar agenda and it has no realization about hurting the sentiments of crores of Muslims of own country.

He emphasized upon the members of the Senate and the National Assembly not to carry forward foreign and un-Islamic agenda of the rulers. Ch Shujat Hussain further said that the sit-in I Islamabad on Khatm-e-Nubawwat matter was also the result of incompetency and adamancy, the rulers should not act in future in any manner that the country may have to face crisis like situation again. # 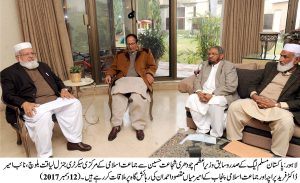