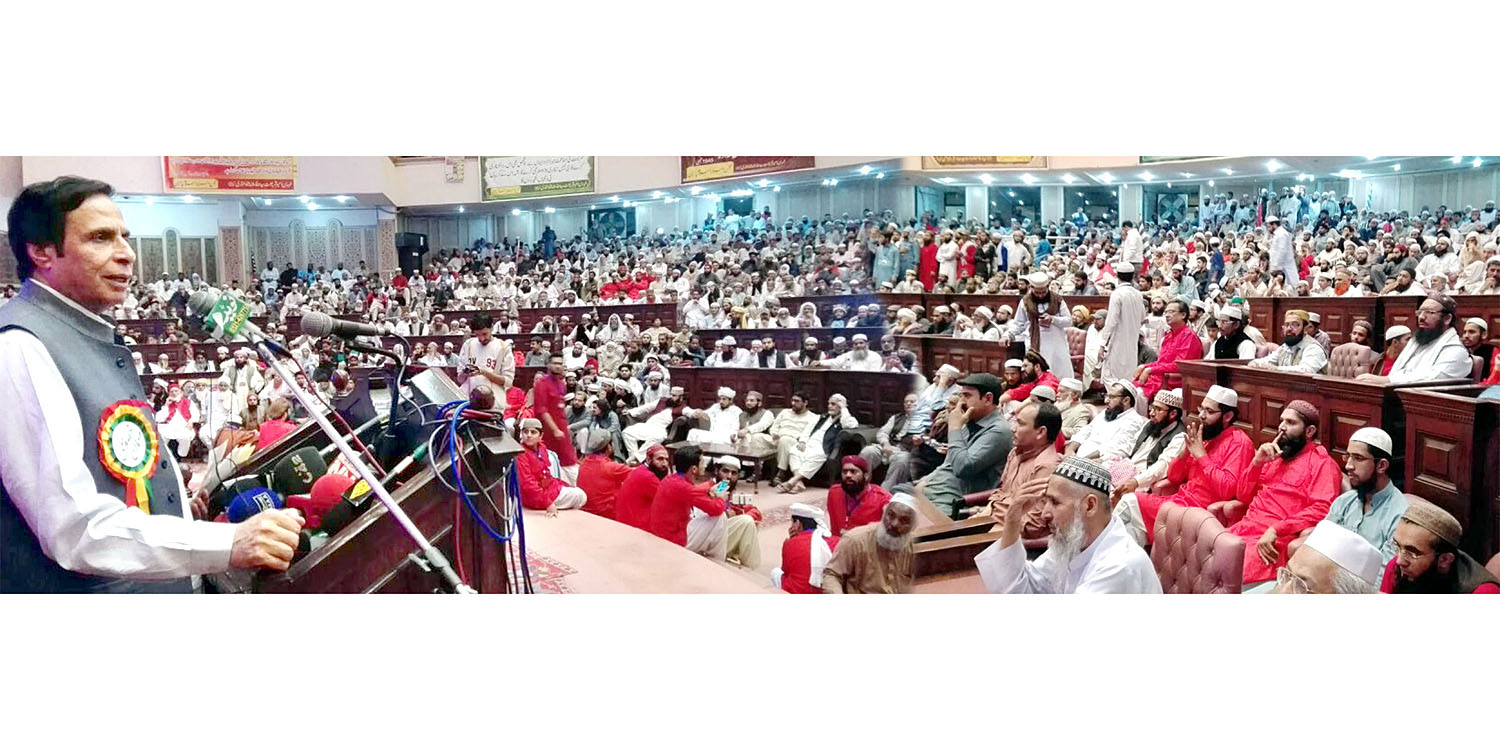 People should remain alert, giving protection to those who changed declaration text has proved N-League leadership was behind this heinous conspiracy

Lahore: 09-03-2018: Pakistan Muslim League (PML) senior central leader and former Deputy Prime Minister Ch Parvez Elahi has warned that some elements are still trying to get Tahuffuz-e-Khatam-e-Nubawwat (ﷺ), law scrapped, through change in Khatam-e-Nubawwat declaration in fact satanic covered attack was committed on Khatam-e-Nubawwat law which the nation had foiled, but the elements who had done this heinous conspiracy the government is still protecting them till now and not disclosing their names, there remains no doubt now that behind heinous conspiracy of change in the declaration was present N-League present leadership itself who did this activity to please the West and the same is providing protection to them till now.

Addressing Ameer-e-Shariat Conference at Aiwan-e-Iqbal here today (Friday), he said there is dire need today entire nation has to pledge to protect with great spirit and enthusiasm of Tehrik Khatam-e-Nubawwat (ﷺ) so that the failed attempt which the present government had committed in future nobody should dare to do that.

He said in the Muslim world this honour came in the share of people of Pakistan that they did formal legislation for Tahufuz-e-Khatam-e-Nubawwat, not only not acceptor of Khatam-e-Nubawwat was declared Kafir at the state level but also their posting at key posts of the state was made impossible.

He said that in 1973 Qadianis attack on Nishtar Medical College students at Rabwah Railway Station proved forerunner to Khatam-e-Nubawwat Movement, Almighty Allah had blessed Ch Zahoor Elahi Shaheed to be first to present privilege motion in the National Assembly.

Making detailed mention of relation of his family with Ameer-e-Shariat Syed Attaullah Shah Bokhari, Hazrat Shah Ahmad Noorani and Maulana Mufti Mehmood he said that Ch Shujat Hussain and he used to be regularly be present in the service of Majlis Khatam-e-Nubawwat Maulana Khan Muhammad and even in his last days we also served him.

Paying tributes to Ameer-e-Shriat Syed Attaullah Shah Bokhari, he said that his native district is also Gujrat, may Almighty Allah bless him as per his greatness through whom the Ummat was saved of this “fitna” and today his future generation is also continuing this sacred mission, he has the honour that in Syed Attaullah Shah Bokhari’s Gujrat Azad Muslim High School in 2002 he on becoming the Chief Minister had provided new building and also ground for the first time, this school is functioning in the center of Gujrat city as Government Muslim High School even now.

Ch Parvez Elahi further said as the Speaker Allah had blessed him with the honour that name of Rabwah was changed to Chenab Nagar, in passport when entry of religion was changed then Ch Shujat Husain and he had taken the stand and with blessings of Almighty Allah, this entry has restored in the passport.

In the end, thanking Majlis-e-Ehrar Quaid Syed Attaul Muhayimin Shah Sahib and all other organizers, he prayed that may Almighty Allah may continue taking service of protection of Khatam-e-Nubawwat (ﷺ) from us and our family and our relation with the family of Hazrat Ameer-e-Shariat should also remain intact, Ameen. #