Entire country including Balochistan respect and honour political sagacity of Chaudhry Sahibaan, I am also with them after the father, relation of respect will always remain, Bizenjo

Balochistan leadership of our party also has the art of talking all along, we all together have to work for Pakistan, PML leaders talk with media

N-League spent money in the Senate election, prime minister statement against Chairman Senate does not behave him, first he should see himself, Chief Minister

Ch Shujat Hussain and Ch Parvez Elahi said that name of Pakistaniyet thinking is Muslim League which should be at one platform because Pakistan is first and foremost and if Pakistan is here then we all are also here, same thinking is there in Balochistan also and out party’s Balochistan leadership has the art of taking all along, we all have to work together for Pakistan,

Chief Minister Bizenjo said that very old relationship of respect and honour with Chaudhry Sahibaan which will always remain, in Balochistan also like entire country Ch Shujat Hussain Ch Parvez Elahi’s political sagacity is appreciated and they are duly respected, they also given everyone honour and respect, we have old relation of love and respect with them we from Balochistan lay down our life even for those giving us respect, earlier my father was with Chaudhry Sahibaan, on my entering politics in 2001 I also remained with them and even in 2013 people of Balochistan had expressed love for them which still exists, we have great regard and respect for this house.

Appreciating determination, courage, hard work and wisdom of Abdul Quddus Bizenjo, Ch Shujat Hussain said that we want to see Balochistan as autonomous province, I have always told Chief Minister Abdul Quddus Bizenjo that he should keep Pakistan and thought of Pakistan uppermost and work for his province, he has given honor, respect and importance to his colleagues.

Ch Parvez Elahi said that we have old, lasting and strong relations with Balochistan and Chief Minister Bizenjo, our and his elders also had close relations, Muslim League is name of a thinking which is only Pakistan, we all have to give importance to Pakistan and people having similar thinking should be united on one platform because all are here if this country is here, Balochistan leadership also has similar thinking, we should first see Pakistan and then Muslim Leaguer mind and pray for their success.

Chief Minister Bizenjo that Pakistan Muslim League has always raised voice for the rights of Balochistan, N-League spent money in Senate election, members from Balochistan were also offered money, office of the prime minister is of respect, election of Chairman Senate was held through secret balloting and democratic process, speaking against him is not proper, before raising finger against anyone one should first see himself, this is our political dilemma that we do not accept defeat, N-League should why people of Balochistan had drifted away from them. # 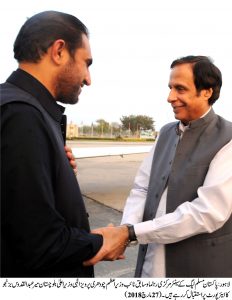