PML has done such works for the workers which are unparalleled in Pakistan: Ch Shujat Hussain, Parvez Elahi, Moonis Elahi

Industrial and agricultural workers were getting prosperous due to our policies, facilities like free education, medicines, 1122, labour colonies and separate social security hospital were provided for them

Lahore: 01-05-2018: Pakistan Muslim League (PML) has undertaken ideal and historical works for the workers and will also do in future, industrial and agricultural workers in Punjab were getting prosperous due to our policies, our government provided facilities like free education, free medicines, 1122, separate social security hospital and labour colonies among others.

Ch Parvez Elahi said that our government had worked day and night for the working class of the country, undertook legislation for providing relief to the workers earlier and will also in future as well so that the working class gets more relief. # 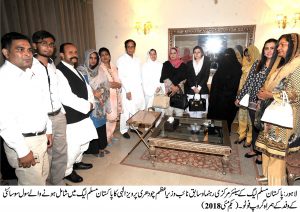