Breaking News
Home / News / English News / Shehbaz Sharif destroyed every system, will have to work for restoration of all sectors: Ch Parvez Elahi

Shehbaz Sharif destroyed every system, will have to work for restoration of all sectors: Ch Parvez Elahi

One person put all members’ signatures for the opposition leader, wait for 100 days on asking of Imran Khan, talk with media

Lahore: 04-09-2018: Acting Governor Punjab Ch Parvez Elahi has said that our presidential candidate is Dr Arif Alvi, there is “barkat” in alliance, we have promised betterment to the people, as such difficulty or easiness in election do not make any difference, real thing is that one should pay attention to own works honestly.

Talking to the media outside the Punjab Assembly here today (Tuesday) while responding to a question about notification of the opposition leader, he said that when a person puts signatures of all which are different from their identity cards then the members themselves have to put the signatures which takes time.

In response to another question, he said that Shehbaz Sharif has destroyed Punjab, nobody else has done so much damage which he has done to every system of the province, peoples’ rights have been snatched, the hospitals and schools of the poor have been destroyed, now improvement has to be brought in ever sector and effective and result-oriented measures taken, one N-League said to me today that hostel rooms are not proper then I said to him why you have remained silent for ten years, why has not asked Shehbaz Sharif that at least put the hostel and employees and drivers place for sitting be put into order, why Punjab Assembly building had not been made operational, instead improving the system of the province Shehbaz Sharif destroyed it, shortcoming was his own and he would transfer government officers within no time, all have seen that period, now have patience for circumstances betterment, leave aside little things.

He said further that Imran Khan has asked for 100 days, give him time and wait.

About a question regarding new local bodies system change, he said that the Local Government Minister can say something better in this regard, N-League had also destroyed this system as well and on coming had snatched powers of local bodies representatives elected during our government. # 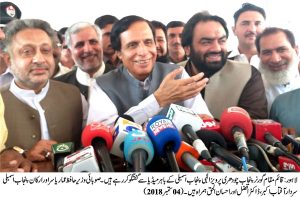