Cases against Nawaz, Shehbaz made by NAB not by Imran Khan, Chief Minister and Speaker: Ch Parvez Elahi

Loss caused by hooliganism will be got compensated from responsible members, reason for use of low language is deficiency in upbringing, respect of the House will be maintained in any case, opposition leader using filthy language which is ample proof of his training, during N-League tenure opposition members were suspended four times, Speaker Punjab Assembly talk with media outside the Assembly

Lahore: 23-10-2018: Speaker Punjab Assembly Ch Parvez Elahi has said that no act over and above Constitution and the law can be allowed inside the House, maintaining prestige of the House is the responsibility of the Speaker, in the past no opposition leader has used such filthy language against the Speaker which the present opposition leader is using, he neither thinks nor understands, use of such low words against the Speaker and the Members is because of deficiency in training, during opposition’s own tenure their own Speaker had suspended membership of PTI Members four times whereas PTI members had never used filthy words against the Speaker nor indulged in hooliganism.

He said this while talking the media outside the Assembly compound prior to the Assembly session here today (Tuesday).

Ch Parvez Elahi said that number of Members who indulged in hooliganism in the House, however, action has been taken against 6 so far, a committee has been constituted for assessing the losses caused to furniture, mikes and recording equipment, loss will be got compensated by those responsible.

In reply to another question, he said that cases against Nawaz, Shehbaz Sharif had been made by the NAB and not be Imran Khan, Chief Minister and the Speaker, the action which the NAB has taken against them neither Punjab Assembly nor the government ministers have any link with that as such their hooliganism in the Punjab Assembly is not understandable. # 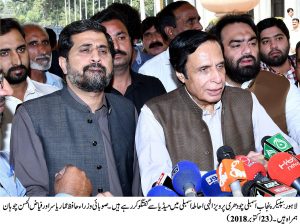