Tributes to Prime Minister for successful visit to Saudi Arabia, for making Punjab an ideal province everyone should move shoulder to shoulder with the Chief Minister: Ch Parvez Elahi

50 per cent cooperation in electricity bills of farmers is appreciable step of PM Imran Khan, Special Committee has been constituted for those who destroyed public money, address in the House and talk with media

Lahore: 25-10-2018: Speaker Punjab Assembly Ch Parvez Elahi has said that successful visit of Saudi Arabia of Prime Minister Imran Khan is quite appreciable for which we pay tributes to him.

Speaking in the House here today (Thursday), he said we are grateful to the Prime Minister for giving Punjab a Chief Minister from the middle class, we should all move shoulder to shoulder with Chief Minister Sardar Usman Buzdar so that Punjab can be developed into an ideal province, 50 per cent cooperation in electricity bills of the farmers is an appreciable step of the Prime Minister, till now no prime minister has given such package for the farmers, during 2002 to 2008 when there was our government in the Punjab 50 per cent of electricity bills of the farmers was paid by Government of Punjab, Prime Minister has extended this package to entire Pakistan, he has sympathy for the poor in his heart, our prayers are with him, may Almighty Allah grant success to him in his mission of serving the people.

He said that it is bounden duty of all of us to fully support the Chief Minister nominated by the Prime Minister, I know he also wants to do something for Punjab.

The Speaker felicitated the Chief Minister for presenting a peoples’ friendly and balanced budget despite financial difficulties faced by the Punjab and also appreciated the Members for fully and actively participating in the budget session.

Ch Parvez Elahi while talking to the media prior to the session said that Shehbaz Sharif had wasted money of the tax payers out of his sheer inefficiency, prejudice, people’s enmity and victimization, development projects of our tenure could not reach the status of completion, destroyed education sector, during our government 40 new colleges and a dental university were being constructed all of which were scrapped, highhandedness was done with the patience by stopping construction of hospitals.

He said that a Special Committee of the House will look into delays in completion of these projects with sincerity of purpose and fix the responsibility on those who wasted public money and present its report in the House. He said that projects which became victims of prejudice will be re-examined and those responsible for cost escalations will be asked to pay that amount, when I had assumed the government as the Chief Minister then exchequer was all empty, I worked hard and protected the public money, if the ruler has good intention then Almighty Allah also helps.

Ch Parvez Elahi further said that membership of 6 Members who indulged in hooliganism during budget speech has been suspended but they were only debarred from entry into the House during the current session.

About the undemocratic and unwise attitude of the opposition, he said that parents provide good education and training to their children if the child remains within civilized limits then the parents benefit and even the child also gains after all because they are like our children it is our duty to pinpoint to the children what wrong they are committing.

When asked that the opposition says that id difference in the attitude of the Speaker National Assembly and Ch Parvez Elahi, he said that the protest is the right of opposition but see the difference between the National Assembly and Punjab that there during the session there was an uproar no doubt but neither nobody had caught anyone by throat nor dirty and filthy language used against the Speaker and the Members, here opposition indulged in protest after election of the Speaker and they crossed all limits during the budget speech and used dity language against the Speaker, at the instance of Hamza Shehbaz they attacked the Chair, caught and pulled the Assembly staff by their necks, broke the mikes, damaged furniture and other government property.

The Speaker maintained that running the House in accordance with the Rules and ensuring proper atmosphere as a Speaker is my responsibility and I will leave no stone unturned in shouldering my this responsibility. # 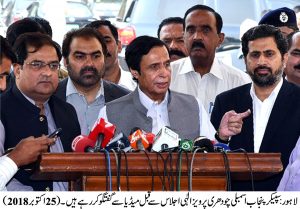