During the meeting views were exchanged, which lasted for some time, regarding prevailing political, economic and financial situation besides other matters of mutual interest.

Speaker national Assembly Asad Qaiser said that for pulling the country out of problems confronting it, all provinces will have to work with the Federation for taking special measures. He said that solution of the peoples’ problems lies in the strength of the Parliament. He said for legislation, everyone will have to play role over and above party affiliations. He said in the proceedings of the House, it is essential to uphold rules and regulations parliamentary traditions. He said that maintaining sanctity and respect of the House is the collective responsibility of all members. Speaker Asad Qaiser said that the country is presently passing through difficult economic period, for overcoming this crisis difficult decisions will have to be taken. He said for tackling economic crisis, there is dire need for implementing austerity campaign in real meanings.

He said that in the world only those nations reach the tope which remain steadfast in difficult time, Pakistani nation has always faced the difficult circumstances squarely. He said the Federation and the provinces will have to solve important problems of the people on priority basis through legislation.

Stressing the need for solving the problems faced by the Federation and fully empowering the provinces, he said that the Federations needs to adopt joint strategy along with the provinces. Stressing also on the need for promotion of contacts between the National Assembly and the Provincial Assemblies, Speaker Asad Qaiser said that every possible cooperation for accelerating legislation and enhancing capacity building of the staff will continue.

Speaker Punjab Assembly Ch Parvez Elahi said that Punjab province is standing shoulder to shoulder with the Federation and will continue playing its practical and fundamental role for pulling the country out of the crisis. He said that for solving the grave problems presently confronting the country, all political parties present in the Parliament will have to play their joint role.

He said that the people need numerous fundamental essential needs of the life including health, education, drinking water solution of which is included in the priorities of the present government. He said with strong economy we can overcome soon problems like unemployment and poverty. # 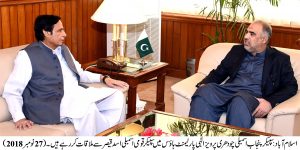