Focus of our politics is welfare of common and poor man, undertook record ideal and historical works, Speaker Punjab Assembly

They had called on them under leadership of Babu Muhammad Kashif who is also President Sabzi and Fruit Mandi district Gujranwala and President Human Rights Punjab at their residence here today (Monday).

Appreciating their decision, Ch Parvez Elahi said that focus of our politics s welfare, well-being and provision of basic facilities to common and poor man this is the reason that whenever we got the opportunity we had undertaken historical and ideal works, not only started mega projects in Punjab but also completed them which was never done earlier in the history.

Babu Muhammad Kashif that as the President of the Araeen community, acknowledging the leadership qualities of Ch Shujat Hussain and yours, entire Araeen community accepts its leaders and in future on every front people of Gujranwala will be with you. # 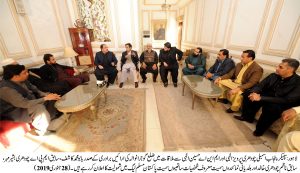