Expressing their views about Ch Shujat Hussain, they said that he is a seasoned politician, on many occasions he took important national decisions with his wise thinking including entry of religion in passport and bringing dead bodies of Overseas Pakistanis from foreign countries to Pakistan free of charges are worth mentioning.

Ch Parvez Elahi expressed gratitude to them for good sentiments. During the meeting, views were also exchanged about prevailing political situation. # 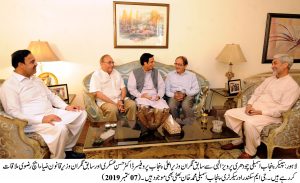