As the Chief Minister you undertook ideal works for the welfare and well-being of the lawyers’ community and south Punjab, Assistant Advocate General and other lawyers gratitude

Lahore: 13-10-2019: Speaker Punjab Assembly Ch Parvez Elahi has said that focus and objective of our politics is service to the common and poor man and foremost priority is to remove deprivations of backward communities and areas.

He said this while talking to a delegation of lawyers which called on him under leadership of Assistant Advocate General Ch Zulfiqar Ahmad Sindhu at his residence here today (Sunday).

Appreciating the people’s welfare works of Ch Parvez Elahi as the Chief Minister for well-being and welfare of lawyers’ community and South Punjab the delegation members said that we express gratitude for removing the deprivations of people of Multan during your tenure and establishing Cardiology Hospital, Dental College, Burn Centre and Children Hospital.

They said that you have played important role in eliminating deprivations of the South Punjab and for this purpose took ideal, immediate, effective and result oriented measures.

Expressing his gratefulness to the delegation, Ch Parvez Elahi said that whenever we get the opportunity we solve the problems of the people on priority basis, in future our effort to make possible provision of health, education and basic facilities to the people of the Punjab. # 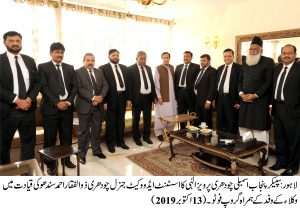