Kabaddi matches to be held after Kartarpur Corridor opening

Strategy evolved for holding of Kabaddi World Cup in Pakistan

Lahore (October 19, 2019) Pakistan Kabaddi Federation annual meeting was held under chairmanship of President Ch Shafay Hussain here today (Saturday) in which annual performance report was present and approval was accorded to the next to be held games and events.

President Kabaddi Federation Ch Shafay Hussain said that kabaddi is a local game, it should be promoted to the maximum extent, so-called fake body is spoiling the players against which legal proceedings are being initiated and soon it will be banned by the Government of Pakistan.

Ch Shafay Hussain said that Pakistani and Sikh communities greatly like kabaddi for this strategy is being evolved for holding next Kabaddi World Cup in Pakistan. He said that Pakistan is also promoting game of kabaddi in entire Europe besides Asia.

Holding of international kabaddi match after inauguration of Kartarpur Corridor also came under discussion in the meeting and in this regard 7-members committee was approved in which two women will also be included while line of action about the Olympic Games was formulated. # 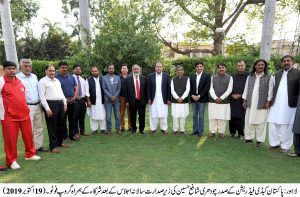