Secretary General Ameerul Azeem and other Jamaat leaders accompanied him

Sirajul Haq inquired about welfare of Ch Shujat Hussain and congratulated him on his recovery.

Political situation and other matters of mutual interest also came up for discussion in the meeting. # 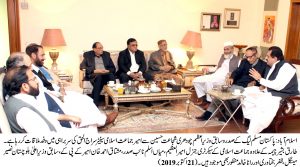