It is our desire that parliamentary, trade and economic relations between the two countries be further extended, Portugal delegation calls on Speaker Punjab Assembly

The Speaker informed the guests about the structure of the assembly, parliamentary traditions and its Rules of Procedure.

Discussion also took place during the meeting on promotion of bilateral trade between the two countries and consensus also reached on boosting contacts among their people.

Talking to the delegation Ch Parvez Elahi said that Pakistan highly values its mutual cooperation and bilateral relations with Portugal. He expressed the desire that these relations be further expanded at parliamentary, trade and economic levels.

The Speaker said that steps should be taken for bringing business communities of both countries closer to each other and benefit from experiences of each-other’s technology experts.

Dr Carlos Calazan said that Portugal wants to promote mutual cooperation with Pakistan in trade, information technology, education and other fields because both the countries can have useful results by increasing cooperation with each other. 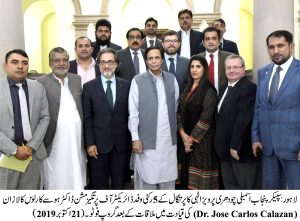