India should also solve Kashmir issue and provide opportunity to the Kashmiris to live their life independently, talk in Kartarpur

Expressing his views on this occasion, Ch Shafay Hussain said that Prime Minister Pakistan Imran Khan has won the hearts of Sikh community through welcome step of opening of second biggest spiritual centre of Sikhs, Pakistan Army’s institution FWO completed it in 10 months record period which is quite appreciable, with opening of Kartarpur Corridor an old desire of Sikhs from all over the world has been fulfilled, because of which love between the Sikh community and Pakistan will be further promoted.

Ch Shafay Hussain said now India should solve Kashmir issue to fulfill old desire of the Kashmiris so that they can lead their life independently. 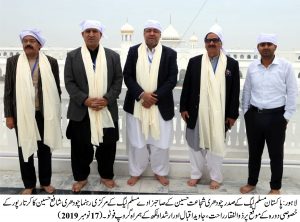