In the meeting Ch Shujat Hussain birthday cake was cut, all leaders also prayed especially for his healthy long life

During the meeting, views were exchanged about prevailing political situation in the country.

In the function, especial prayers were also offered for long healthy life of Ch Shujat Hussain.

Political and social personalities from all over the country sent flowers and cakes gifts on birthday of Ch Shujat Hussain and expressed good wishes for him.

Party leaders opined that Ch Shujat Hussain is the only example of elegance in politics; he has always served the country and the nation through his sayings and actions. # 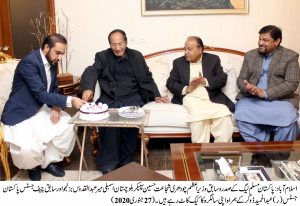