During your chief minister-ship rights were granted to the minorities and our status recognized, Father Mushtaq Azad

During the meeting, views were exchanged about difficulties confronting the Christian community including human rights and religious harmony.

Ch Parvez Elahi said that people of all faiths and religions enjoy complete religious freedom in Pakistan, Pakistan Muslim League (PML) undertook ideal works for their welfare and well-being and rights, during our tenure they were given representation in the assemblies, during my chief minister in Punjab, their educational institutions were returned to Christian community, for the first time fully empowered Ministry of Minorities Affairs was established and proprietary rights were given to them in their kachi abadis, funds were allocated for repairs and maintenance of churches.

Father Mushtaq Azad invited Speaker Punjab Assembly Ch Parvez Elahi for attending All Pakistan Communities Conference being held in Islamabad and appreciating his great service for the Christian community said that during your tenure, minorities were given their right and for the first time our status was recognized. # 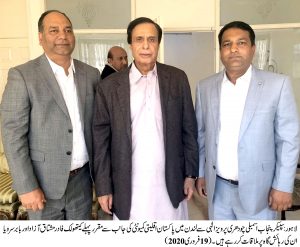