One on one meeting between CM Usman Buzdar and Speaker Ch Parvez Elahi, views exchanged on increasing mutual cooperation

Want maximum be delivered to the people: Ch Parvez Elahi

Agenda for peoples’ service will be extended together: Chief Minister Punjab

Both the leaders exchanged views on further promoting mutual cooperation whereas created in the Punjab Assembly over Deputy Speaker’s matter also came under discussion.

Both the leaders unanimously agreed that allies’ matters will be carried further amicably.

Ch Parvez Elahi said that we want that maximum should be delivered to the people. The Chief Minister said that the agenda for peoples’ service will be extended further together. # 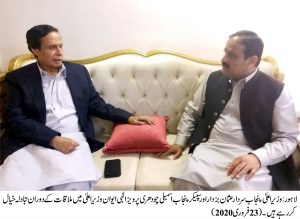