Doctors and staff of all Quarantine Centers be provided protective kits and Corona test of all prisoner of Punjab jails be ensured: Ch Parvez Elahi

All members should send their pre-budget proposals at assembly’s e-mail address, proposals will be forwarded to the Finance Department, address at meeting

Parliamentary Committee members apprised the meeting about their proposals.

Speaker Ch Parvez Elahi said that Corona test of inmates of all jails of Punjab be ensured and also doctors and staff performing duties at all Quarantine Centers be provided protective kits PPE essentially as a must.

During the meeting, Finance Minister Makhdoom Hashem Jawan Bakhat briefed about preliminary points regarding the next financial year budget whereas Additional Chief Secretary Home Momin Agha apprised about the government measures so far about Corona tests of the prisoners in jails.

Ch Parvez Elahi said that all members of the Punjab Assembly should send their respective proposals on this e-mail address budget.proposals@pap.gov.pk which will be forwarded to the Finance Department. # 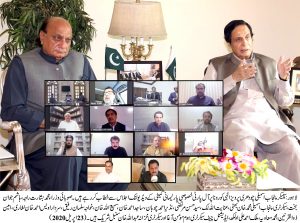