Had N-League completed building started during Ch Parvez Elahi tenure need would not have arisen for holding session in hotel: CM Usman Buzdar

Chief Minister Punjab Usman Buzdar said that if N-League had completed the building started during tenure of Ch Parvez Elahi then now the need would not have arisen to hold the session in a hotel.

Directing the concerned officials to complete the work of new building early, he said that all essential works should be completed by end of September, delay caused in some matters due to Corona should be compensated by working continuously, Punjab Government will continue extending full support for completion of remaining work of the new building, new building will be state of the art and for early completion of this project funds will be provided on war-footing basis. He said that that this project is Speaker Ch Parvez Elahi’s own project, want to complete the building at the earliest to open it for the Assembly members, during last tenure this project was made victim of arrogance, former rulers attached priority to their personal likes and dislikes in the public welfare projects, along with Punjab Assembly’s new building, MPAs Hostel should also be completed at the earliest.

Speaker Punjab Assembly Ch Parvez Elahi said that that the past rulers intentionally caused delay in the new building project, we are grateful to Chief Minister Punjab Sardar Usman Buzdar for his support regarding construction of new building and hostel, public money was wasted due to delay and construction cost also was escalated, there was break in the work due to Corona but now there is need for further accelerating work on this project.

Ch Parvez Elahi said that decoration on the roof will be completed by end July by NCA, in the basement of MPAs Hostel building there will be facility for parking 600 vehicles.

Want journey for peoples welfare be speeded up through mutual cooperation, journey for serving the people will be forwarded with greater speed, Ch Parvez Elahi

During meeting views were exchanged regarding matters of mutual interest, political situation and progress of Punjab Assembly’s new building construction

During the meeting, which was also participated by Law Minister Muhammad Basharat Raja, views were exchanged in detail regarding matters of mutual interest, political situation and progress of construction of Punjab Assembly new building.

Both the leaders agreed that elements indulging in propaganda will be faced jointly.

Chief Minister Usman Buzdar said that we are taking the allies along, alliance matters are becoming more stable with every passing day, Punjab Government focus is on solution of peoples problems and measures for providing relief to the people, in any case together will continue serving the people of the province, best working relationship is established with Pakistan Muslim League.

He said that we are shoulder to shoulder with the Punjab Government in the mission of serving the masses, want that journey for providing relief to the people be speeded up through mutual cooperation, will further accelerate the journey for serving the people, wishes of those desirous of rifts will never be fulfilled.

Ch Parvez Elahi further said that during the last tenure the shape of the province was destroyed, province was bankrupted due to wrong policies of the past government, common many suffered due to delay in the public welfare projects, present tenure is the peoples own tenure. He said that we are ally of Tehrik-e-Insaaf and will continue working together for the welfare of the masses, serving the people is our mission. # 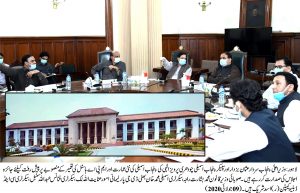 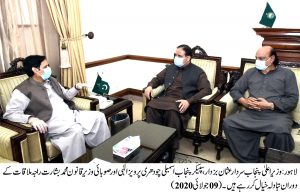