The Corona situation is much better but practicing SOPs is still essential, if previous governments had not scrapped development then situation would have been different today

On this occasion, views were exchanged about bilateral political situation and matters of mutual interest. During the meeting, increasing people to people contact campaign particularly trade, agriculture and tourism between the two countries were deliberated.

Ch Parvez Elahi said that cooperation with Belarus in trade, education, health and agriculture sectors will have a positive impact on the economies of both the countries.

He said that pandemic of Corona has greatly adversely effected economic situation internationally, thanks to Almighty Allah circumstances are improving in whole Pakistan including Punjab but still the people will have to practice SOPs.

Honorary Consul General Waleed Mushtaq said that Pakistan is viewed with great regards in Belarus, there is great demand for Pakistani rice there but difficulties are faced due to trade restrictions.

He said during your tenure as the Chief Minister, great progress and development was witnessed in the Punjab particularly in agriculture, education and health sectors and development works were launched in collaboration with the UNSF.

Ch Parvez Elahi said that previous governments scrapped the development projects of our tenure instead of carrying them onwards, if development were not stopped then the situation would have been different today. 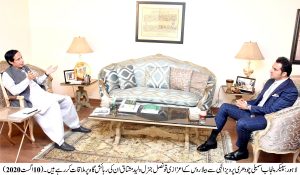