Lahore (13-08-2020) Pakistan’s 64 per cent population comprises the talented youth, solution of Pakistan’s economic, political and social problems lies in providing standard education, appropriate employment and political empowerment of the youth, there is dire need to change the educational system more than the academic syllabus.

These views were expressed by Advisor Muslim League Rizwan Mumtaz Ali in the Students and Youth Conference organized by Muslim League Youth Wing Punjab and Muslim Students Federation on the occasion of World Youth Day in Lahore.

On this occasion, Rizwan Mumtaz Ali said that owing to wrong policies in the past youth generation of Pakistan has been deprived of development opportunities, double education system, nepotism, inactive students unions and non-representation in the local government are today greatest obstructions in the development of youth generation.

Rizwan Mumtaz Ali emphasized on the policy makers that the youth should be provided technical education besides higher education ad such an educational system be evolved in view of the job market requirements which not only highlights and promotes capabilities of the youth but also besides employment, self-employment and dignity of labour be made part of the youth’s thinking.

Other delegates participating in the conference expressing their views emphasized on practical steps for tackling the problems confronting the youth.

At the end of the conference, Youth Wing and MSF jointly read out the declaration of the moot wherein it was stated that for the security and development of the country it is essential, saving the youth generation from desperation protection from negative trends is the important need of the time, today majority of Pakistan population comprises the youth to whom providing standard education, appropriate employment and politically empowering is the responsibility of the State.

It was emphasized in the declaration that the government should hold consultations with all the economic sectors for creating maximum possible employment opportunities for the youth. # 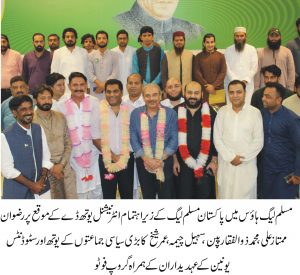