Saudi Arabia is not only our brother but also center of our religious beliefs: Ch Shujat Hussain, Parvez Elahi

Foreign Office should have exercised maximum care in Pak-Saudi relations, everything is not for making public every time

If we pinpoint mistakes for correction this is also considered opposition and enmity, this attitude is not right

PML leaders said that everything is not for making public every time, keeping in view our relations with Saudi Arabia why it has not been discussed quietly by going there, what sort of diplomacy is that you start raising noise while sitting in the home.

Ch Shujat Hussain and Ch Parvez Elahi said that what was the need for giving such a statement after which explanations had to be given.

They said that if we pinpoint mistakes for correction, even if this is considered as opposition and enmity, this is not a right attitude.

They further said that millions of Pakistanis are earning their livelihoods there not from today but for pretty long time, maximum foreign is sent to Pakistan by Pakistanis settled there, Insha-Allah, every patriot will foil the attempt to spoil Pak-Saudi relations. They said that nobody has the right to harm Islamic brother countries relations, this has made Pakistan a laughing stock in the world. # 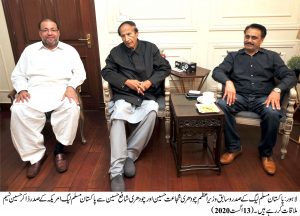