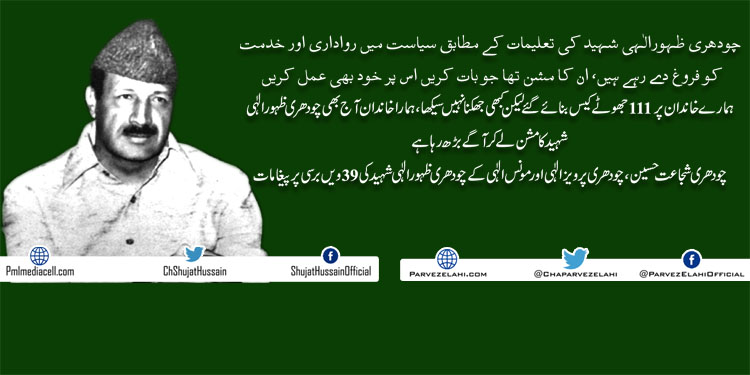 Promoting tolerance and service in politics in accordance with teachings of Ch Zahoor Elahi Shaheed, his mission was whatever you say also implement it yourself: Ch Shujat Hussain, Parvez Elahi, Moonis Elahi

111 false cases were instituted on our family but never learnt to bow down, our family even today is carrying forward the mission of Ch Zahoor Elahi Shaheed, messages on 39th death anniversary

Thanking the party leaders and workers on their participation of death anniversary gathering and love for Ch Zahoor Elahi Shaheed, Ch Shujat Hussain and Ch Parvez Elahi said that 39 years back on this day, it was also Friday, he was martyred but even today people come covering long distances to remember him and love our family the same way.

They said on his death anniversary we revive this pledge that Almighty Allah take such work from us which pleases you and your creatures become happy, Ch Zahoor Elahi Shaheed’s mission was that whatever you say first implement it yourself do not talk just for the people.

Ch Parvez Elahi said that whole life of Ch Zahoor Elahi Shaheed was a quest, he spent entire life struggling, he took part in every movement in favour of Pakistan including Khatam-e-Nubawwat (ﷺ), in 1977 during PNA Movement as many as 111 false cases were instituted on our family but our family has not learnt to bow down, this is the reason that our family is carrying forward his mission even today and promoting tolerance and service in politics. #