Punjab was prosperous during tenure of Ch Parvez Elahi, health, education, law and order and employment were available to every citizen, all were happy be they public or private servants, farmer or worker

On this occasion, she said that the purpose of joining Muslim League is to serve the people, Ch Shujat Hussain and Ch Parvez Elahi want to solve problems of the people. She said that the respect on gets from this family is not available elsewhere, as Chief Minister Punjab Ch Parvez Elahi tenure was the golden era, people were getting their rights at their doorsteps, every citizen had heath, education, law and order and employment, be the public or private servant, farmer or worker, all were happy.

She said that because of epidemic of Corona situation has deteriorated to the extent of concern, as such continue the process of serving the people while strictly observing SOPs. # 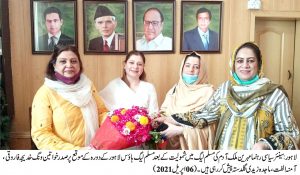