Whether it is legislation of local bodies or election seat adjustment, Insha-Allah will decide together with allies: Governor Punjab Ch Sarwar

It is a very good effort to take all the opposition parties in Punjab Assembly on board and make clause wise decisions on local government system: Governor Chaudhry Sarwar

Private universities are being encouraged in the province, new faculties have been created with better quality which are in no way inferior to international universities, Insha-Allah students will not have to go abroad for higher education: Ch Parvez Elahi, Ch Sarwar

Lahore: 29-01-2022: Punjab Governor Chaudhry Muhammad Sarwar visited the residence of PML President and former Prime Minister Chaudhry Shujat Hussain and Speaker Punjab Assembly Chaudhry Parvez Elahi. Ch Shujat Hussain’s sons Chaudhry Shafay Hussain and Chaudhry Salik Hussain MNA were also present on the occasion. The Governor Punjab inquired about the well-being of Ch Shujat Hussain and wished him a speedy recovery. The current political situation in the country and other issues of mutual interest were discussed in detail during the meeting.

Governor Ch Muhammad Sarwar said that whether it is legislation of local bodies or seat adjustment of elections, Insha-Allah we will take decisions together with all the allies. The Governor of Punjab also appreciated that it was a good effort to take clause wise decisions by taking all the parliamentary parties of the opposition in the Punjab Assembly on board. He said that consensus will make the bill more important and easier to implement, the problems that are emerging on the local body in Sindh will not be in Punjab, it will send a positive message.

Speaker Ch Parvez Elahi said that private universities are being encouraged in the province, bills were also passed unanimously by the Punjab Assembly. He said that new faculties have been created in the universities with better quality which is in no way inferior to the international universities. Insha-Allah students will not have to go abroad for higher studies. # 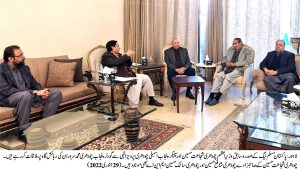