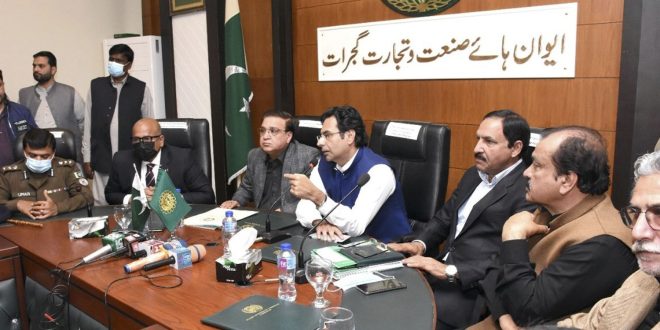 Gujrat Small Industrial Estate will be developed according to international standard and infrastructure, this project will prove game changer for Gujrat, Moonis Elahi

Electricity, gas, water, police station for maintaining of law and other basic facilities will be provided in the Small Industrial Estate from which businessmen, traders including every segment of society will benefit

Nobody will be allowed to do politicking in the completion of the industrial estate, will stand like iron wall against every opponent and baseless propagandist, grateful to Chaudhry Sahibaan who have always really served the people by bringing mega projects to Gujrat, Members Gujrat Chamber of Commerce

He said this while addressing the Chamber of Commerce and Industry in Gujrat.

He said that we have asked the government to give the status of division to Gujrat, when Gujrat will become a division then the industrial estate Gujrat will emerge as a model about which nobody would have ever imagined. He said that its own board of the Gujrat Small Industrial Estate will be constituted which will have no link with politics, and will; itself see all its matters, you people will be the stake holders of this estate and will supervise it yourselves

Moonis Elahi said that in the Gujrat Small Industrial Estate separate blocks will be provided for fan industry, pottery industry and furniture industry so that a special section be provided for every industry, in the allotment of plots in the Small Industrial Estate first priority will be given to the Chamber members, you have the first right above all.

He said that alongside the Small Industrial Estate, TEVTA Institute will also be established in which training will be imparted to plumbers, electricians, and other like works.

Enthusiastic welcome was accorded to Moonis Elahi on arrival at the Gujrat Chamber, flower petals were showered on him and garlanded with golden garlands.

Afterwards, President Gujrat Chamber of Commerce and Industry Mohammad Imtiaz Gobndal, Ch Waheeduddin, Ansar Ghumman, Ashfaq Razi, Sultan Malhi and others in their addresses while thanking Ch Parvez Elahi and Moonis Elahi said that because of your special efforts establishment of Gujrat Small Industrial Estate is going to become possible. They said that the works which your family has done for the people of Gujrat and businessmen community, these were not possible for anyone else. Chamber members said that in the completion of Gujrat Small Industrial Estate nobody will be allowed to indulge in politicking, every member of the Gujrat Chamber of Commerce and Industry will stand like iron wall in front of every opponent and those indulging in baseless propaganda, we are grateful to Chaudhry Sahibaan who have always brought mega projects to Gujrat and thus really served the people of Gujrat. #