Tariq Bashir Cheema apprised them of the problems their party has been facing for the last three and a half years and their solutions were openly discussed. PTI leaders said that they would inform Prime Minister Imran Khan about the whole situation.

Ch Parvez Elahi said that regarding today’s meeting, the party will take President Ch Shujat Hussain into confidence and the next meeting will be held in Islamabad soon. # 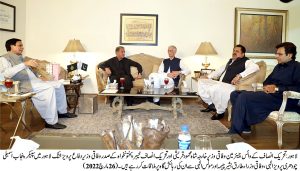