Hamza Shehbaz, Shehbaz Sharif, Deputy Speaker and IG Punjab are responsible for the crisis in the assembly: Ch Parvez Elahi

Members of the Assembly were attacked at the behest of Shahbaz Sharif, MPAs were attacked, the election of the Chief Minister is unconstitutional and illegal, the privilege of the entire assembly has been breached by police interference

There is no constitutional crisis in Punjab. Sardar Usman Buzdar is even today Chief Minister of Punjab: press conference in the assembly along with MPAs

Lahore: 28-04-2022: Speaker Punjab Assembly Chaudhry Parvez Elahi has said that Hamza Shehbaz, Shehbaz Sharif, Deputy Speaker and IG Punjab are responsible for the crisis in the assembly. Members of the Assembly were attacked at the behest of Shahbaz Sharif. Police interference has breached the privileges of the entire assembly. There is no constitutional crisis in the province. Sardar Usman Buzdar is even today Chief Minister of Punjab.

He expressed these views while addressing a press conference along with PML and PTI MPAs in the Punjab Assembly here today (Thursday).

Ch Parvez Elahi said that we had accepted the court judgment regarding Chief Minister Punjab election but situation deteriorated when police attacked the MPAs inside the assembly without any justification, our MPA Asiya Amjad was tortured, till now she is struggling between life and death and is on the ventilator.

Ch Parvez Elahi further said that under the Constitution all business for election of the Speaker, Deputy Speaker and the Chief Minister and no confidence motion etc is conducted by sitting on the Speaker’s chair but the Deputy Speaker conducted the entire election from the Visitors’ Gallery which is unconstitutional, furthermore where our members were to cast their votes, police had blocked that lobby. He said through the illegal police interference privilege of the entire assembly has been breached, in this regard motion is under consideration of the Privileges Committee on which action will be taken in accordance with the Rules of Procedure.

The Speaker said that the court should tell us whether the assembly business to be run by the police or us? Even today without the permission of the Speaker policemen in plain clothes are present on the assembly gates and assembly compound, we will give photographs of these policemen to the media.

Ch Parvez Elahi said that nobody in the streets and mohallas bothered about Sharifs, we got them seated in the assembly and gave respect, issued their production orders, safeguarded their rights under the Privileges Act, made the entire administration stand before them, for the first time in the history IG Punjab Police was summoned to the assembly and the IG apologized to the MPAs and now today he is insulting the assembly.

Ch Parvez Elahi said that the Sharifs have not changed even after five years, commit vengeful activities, they got power six times but they have remained unchanged the same.

Ch Parvez Elahi said what is the crime of Secretary Coordination Punjab Assembly Inayatullah Lak that he has been arrested, orders for arrest of Secretary Assembly Mohammad Khan Bhatti under 3-MPO are also illegal.

Speaker Ch Parvez Elahi said we enhanced the prestige of the Assembly, Sharifs humiliated them in just five minutes, tattered the 18th Amendment into pieces.

Addressing the press conference, MPA Mohammad Basharat Raja said that during the last three and half years we enhanced the prestige of the MPAs, we respected N-League’s narrative of Give Respect to Vote. He said that still N-League has not been given full powers and they are insulting the MPAs, a chief minister elected unconstitutionally wants that he should be given powers of the province, this cannot happen, our candidate was injured and pushed out of the House, our 26 MPAs who have gone towards them, even today if they are minus then N-League is left with no majority.

Raja Basharat said that we have gone to the court against the turncoats, Election Commission has given the date of May 6.

PTI MPA Murad Ras said this cannot happen that the Constitution and all laws are for PTI and N-League be exempted from these. 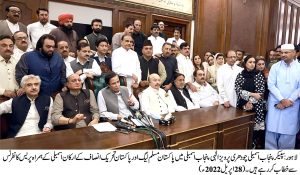